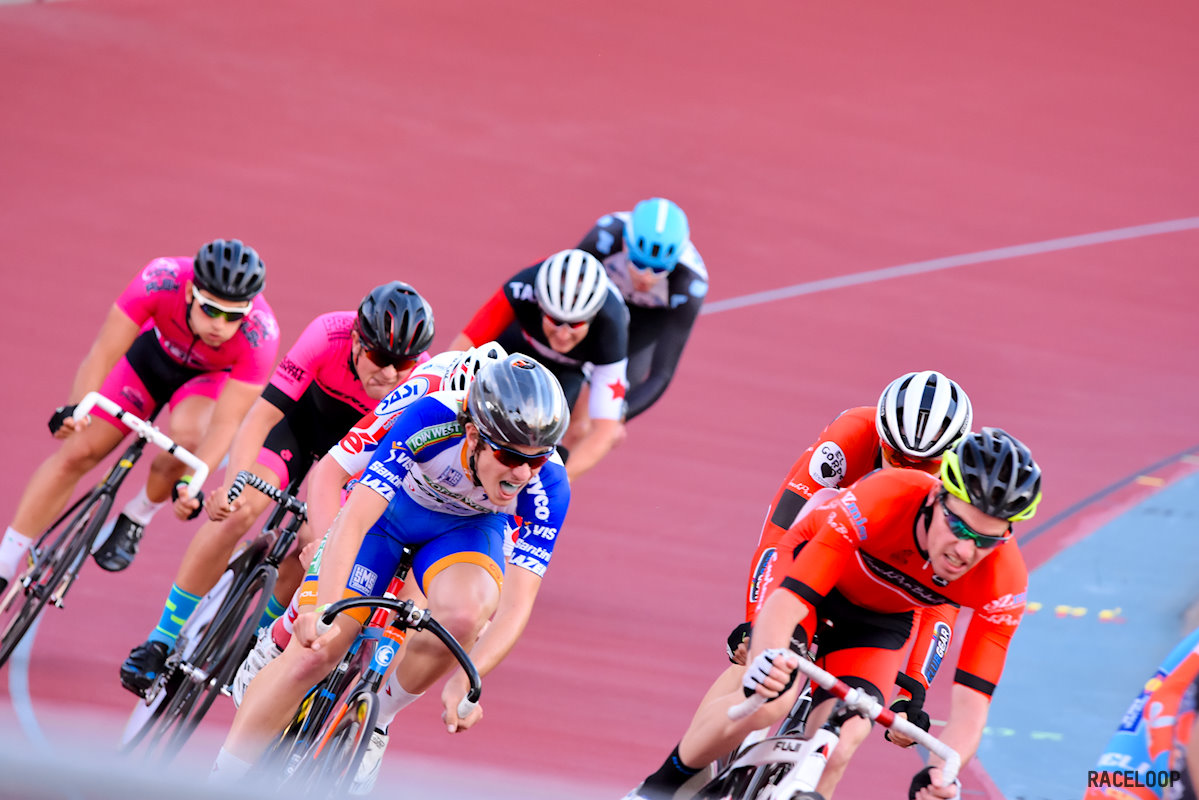 Unique to Australian track racing is the “Wheelrace” or handicap. A key feature of the country carnivals, this exciting format pits world champions against club racers in what is otherwise an Australian tradition. Although they are non-championship events, they are always fiercely contested as they have combine the “thrill of the chase” for the stronger back markers with the possibility of winning against the best for the slower riders. And this is not to mention that they often see the greatest amount of prize money on offer.

Race distances are usually anywhere between 2,000 and 3,000 meters. Riders start from a number of positions around the track, with their handicap (or position on the track) based on current grading and past performances. The top riders start from the ‘scratch’ mark – which equates to the full race distance. These scratch riders – normally top pros, world champions, leading Six Day riders, etc – are the only competitors who have to cover the entire race distance. The other riders are given a head start and therefore ride less distance. Sometimes, the slower front markers can be given over 300 metres head start and which means a lot less distance to travel.

If the handicapper has done his job properly, the theory goes that all riders should finish at exactly the same time – reality usually plays out differently. Sometimes an organised group of front and middle markers can work together to hold off the highly-fancied “scratchies”. The beauty of this is that it gives riders of all abilities a chance to compete against the stars with a theoretic even chance of winning. For spectators it’s incredibly exciting to watch your local club champion beat a world champion. Can you imagine?

The photos below show how the 2016 Golden Mile at the Bendigo International Madison carnival unfolded from where I sat in the Frank McCaig stand on corner 1. Sam Welsford (WA) off 20 meters was the eventual winner over Ben Abels (VIC) off 60 meters. Although Ben was a middle marker, he is a natural sprinter so he was likely to stand a chance in the final. Staying out the front for the final half lap he was just pipped on the line. For me, as a friend of Ben’s, it was thrilling to watch. 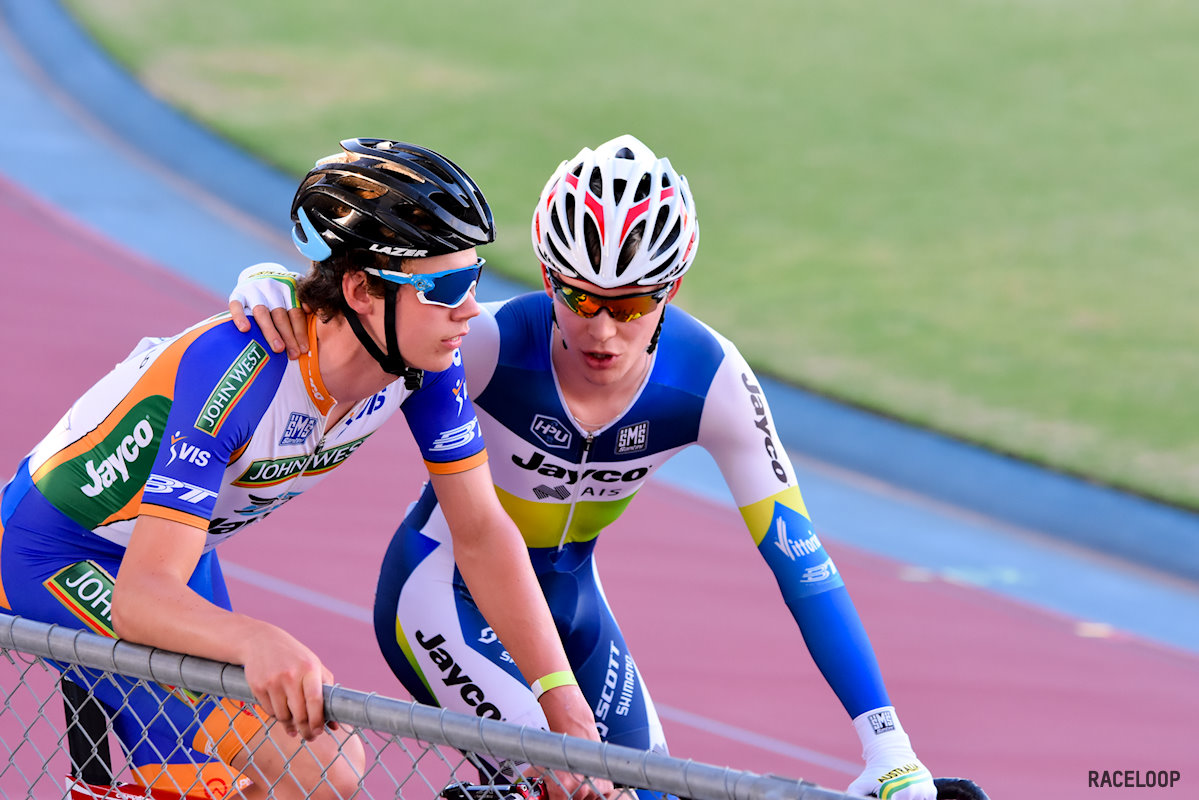 It’s not unusual for riders to get organised beforehand so they can work effectively during the race. Before taking their marks, back markers Kell O’Brien (VIC) off 35 meters & Alex Porter (SA) off 40 meters discuss their tactics to help the back markers “get up” and in the mix for the win. 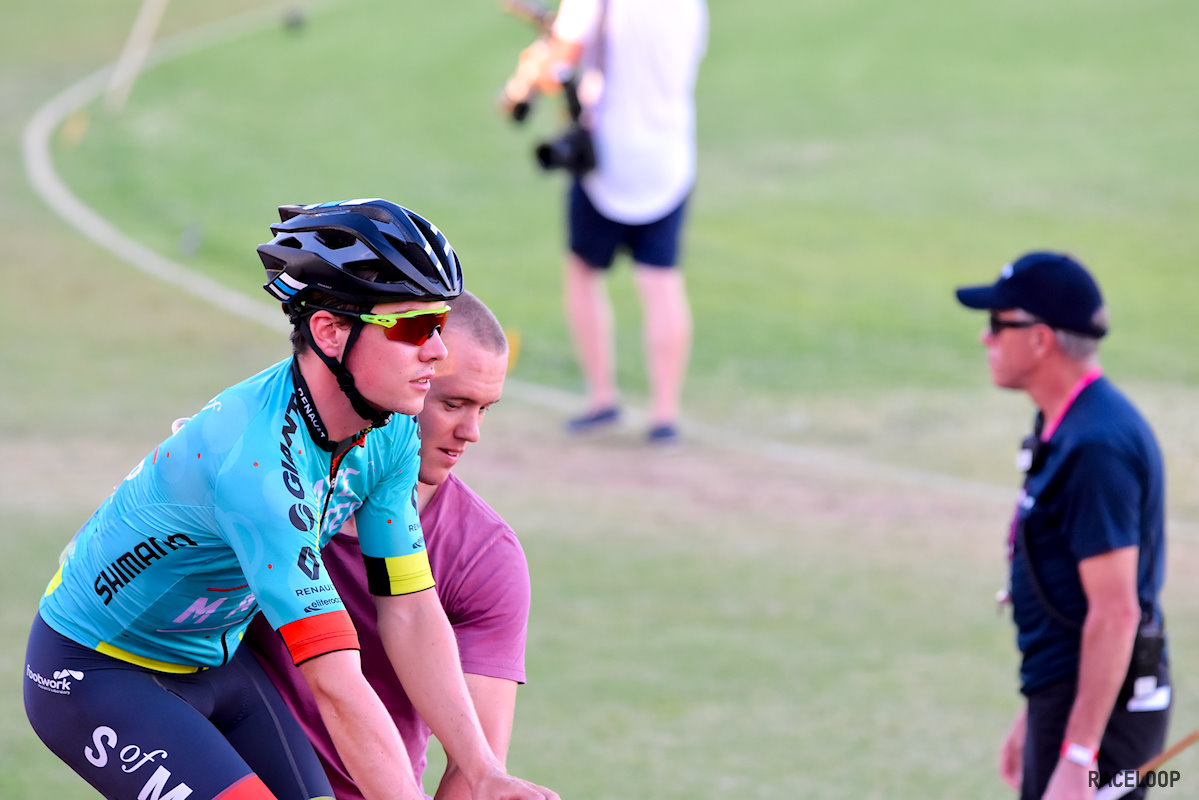 Each rider needs a strong holder who can give them the most powerful push possible. Here, backmarker Luke Parker (VIC) off 40 meters is being held by former Golden Mile winner Callan Douglas (VIC) – a top class track & criterium rider himself. 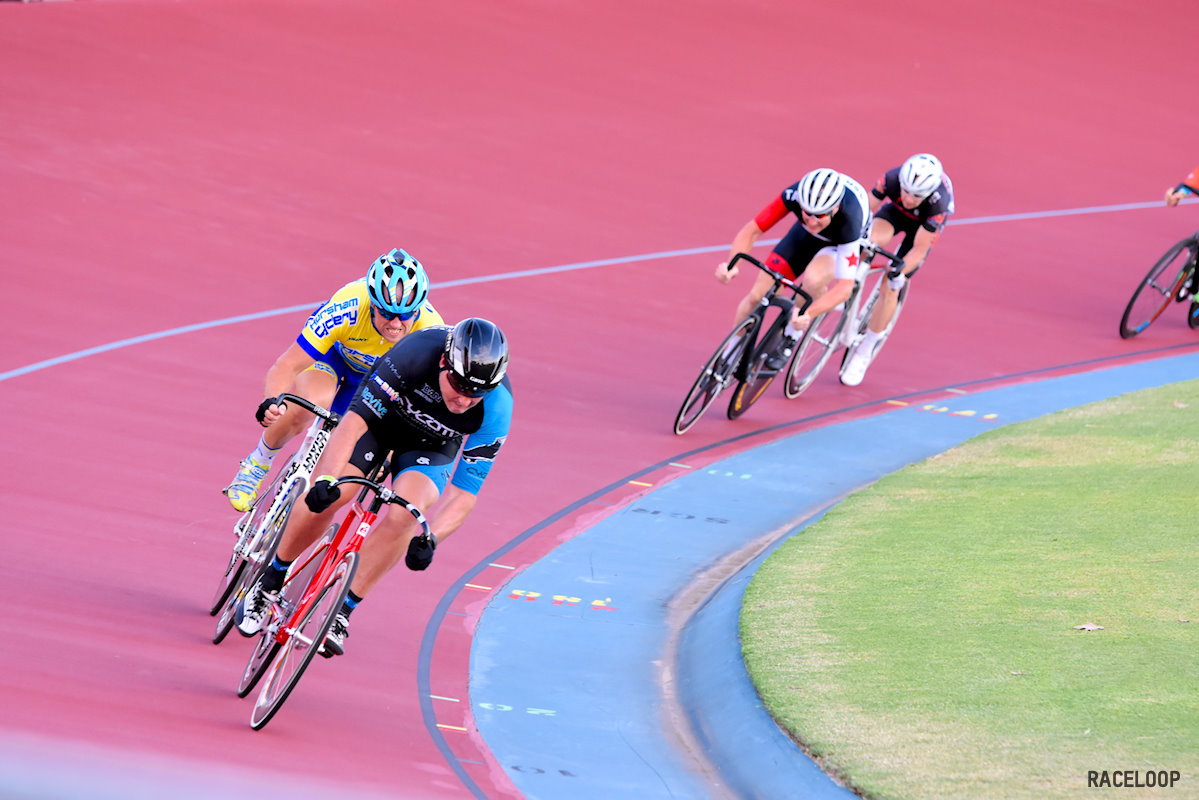 The front markers need to get organised and work together if they are to stand a chance of staying away. Often they are given up to 300 meters head start over the scratch race riders. However, given that the front markers are usually made up of the masters category riders this seems fair. 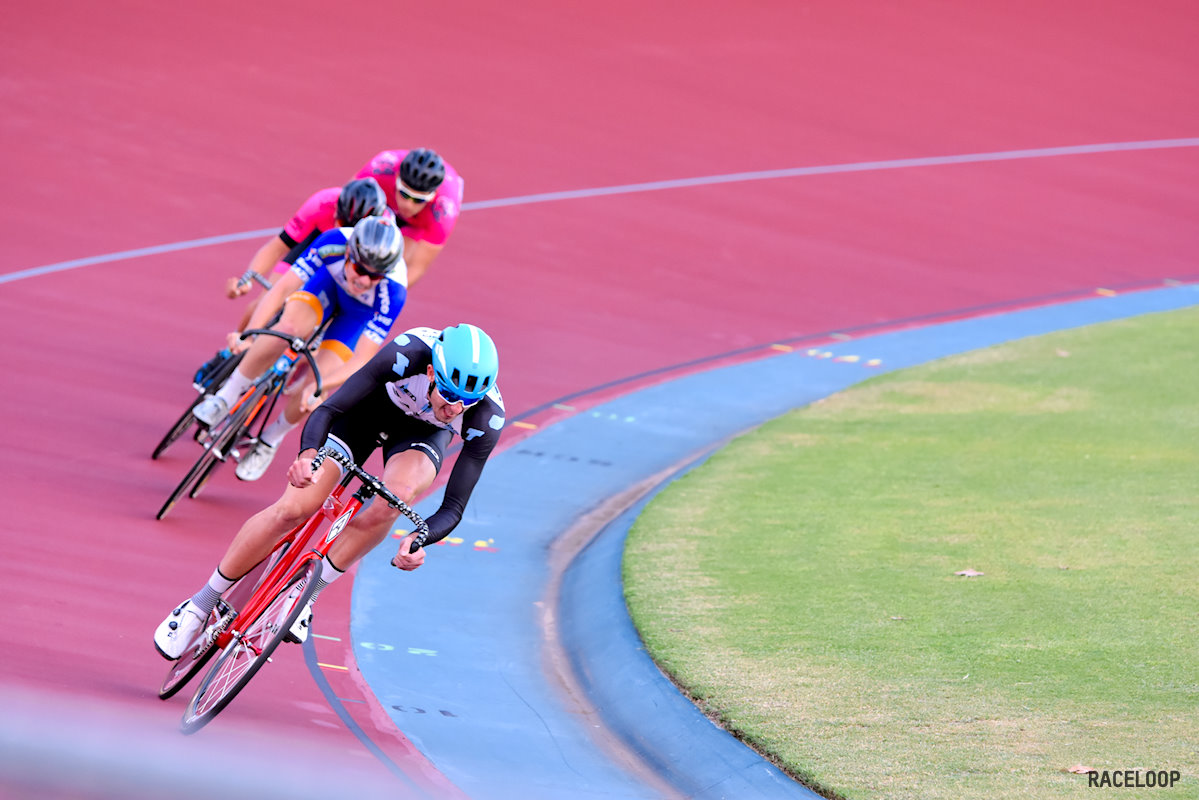 If the middle markers can catch the front markers and stay away the chances of winning are high. If the back markers and scratchies catch them only a top sprinter from the middle markers can win. Ben Abels off 60 meters (VIC), who is still at the back of this group, came close in second place behind eventual winner Sam Welsford off 20 meters. (WA).

In hot pursuit! This group of seven back markers consists of 7 world champions – Kell O’Brien (VIC), Dan Fitter (QLD), Callum Scotson (SA), Miles Scotson (SA), Sam Welsford (WA), Glenn O’Shea (SA) and Jackson Law (NSW). They’ve already shelled a couple of riders. At this point they are riding at over 55km/h on a fixed gear. In other words, they are flying! 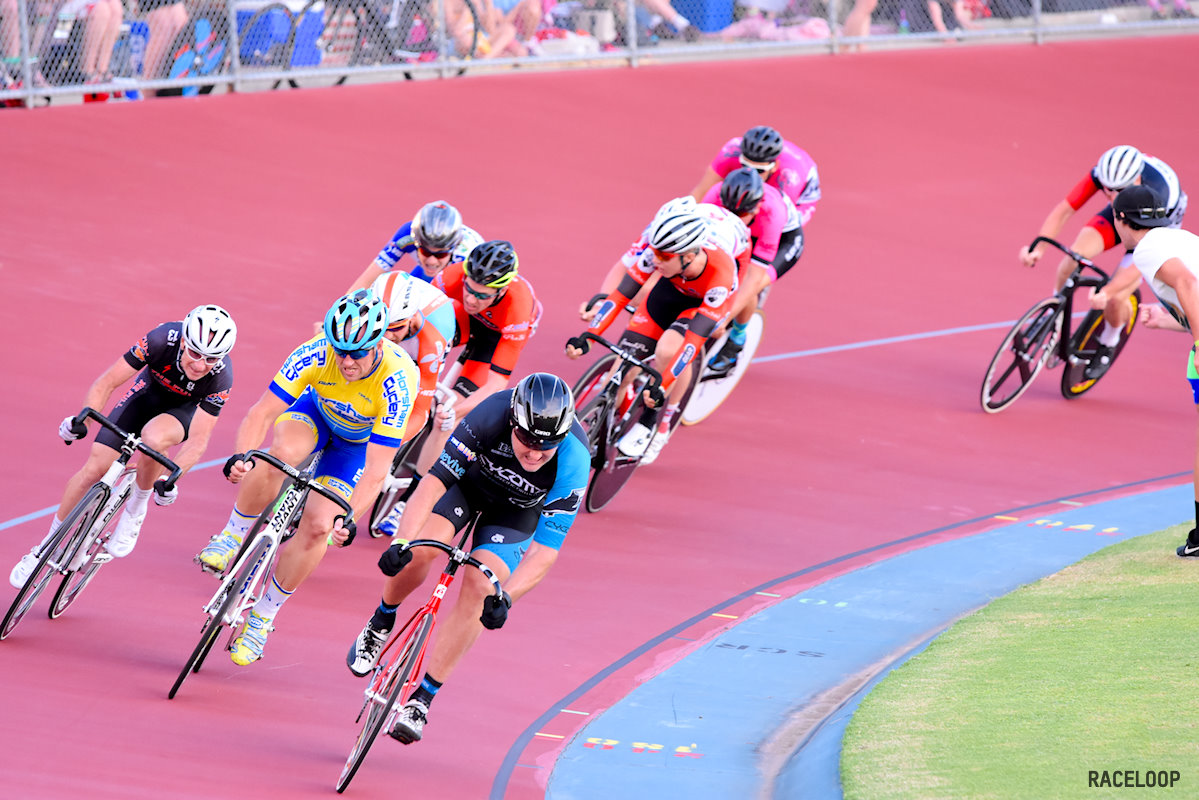 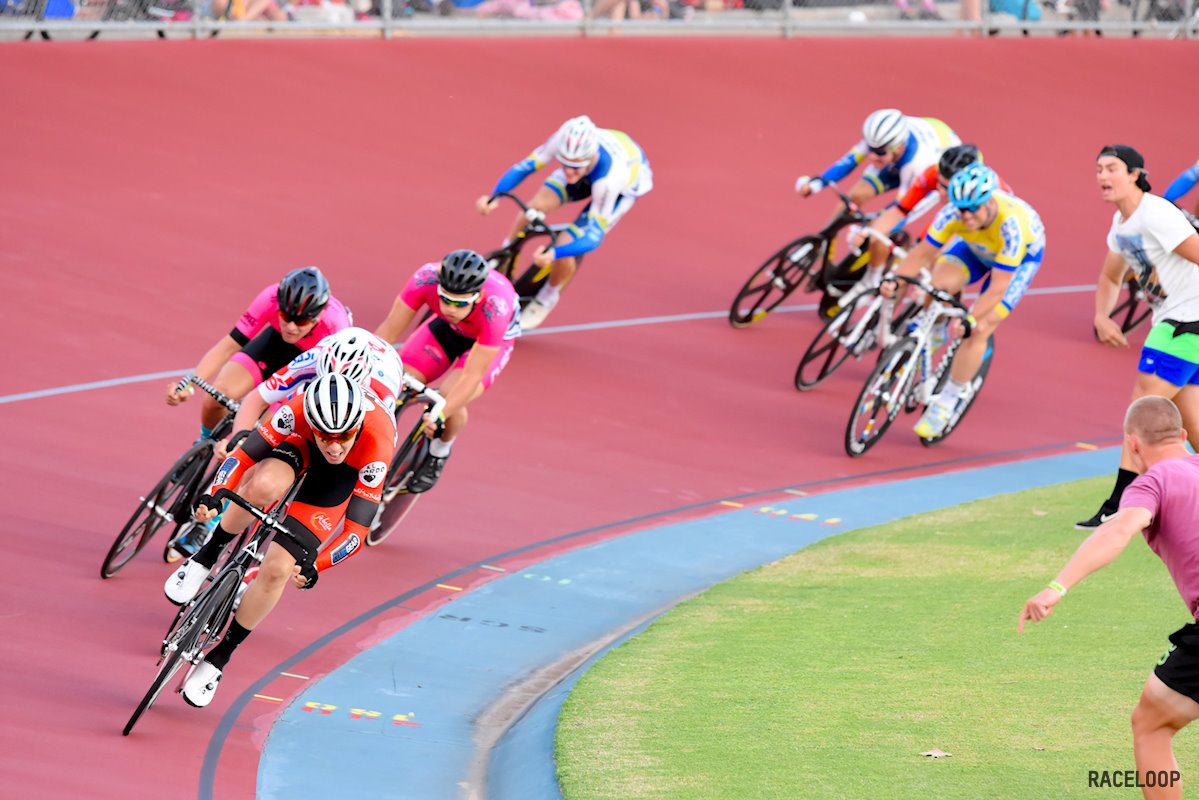 Nic Simpson (120m) from Bendigo driving as hard as possible to keep the middle markers away from the back markers. The back markers have already caught the front markers and are making rapid progress. The holders on the side of the track are screaming “GET A MOVE ON!!!”. 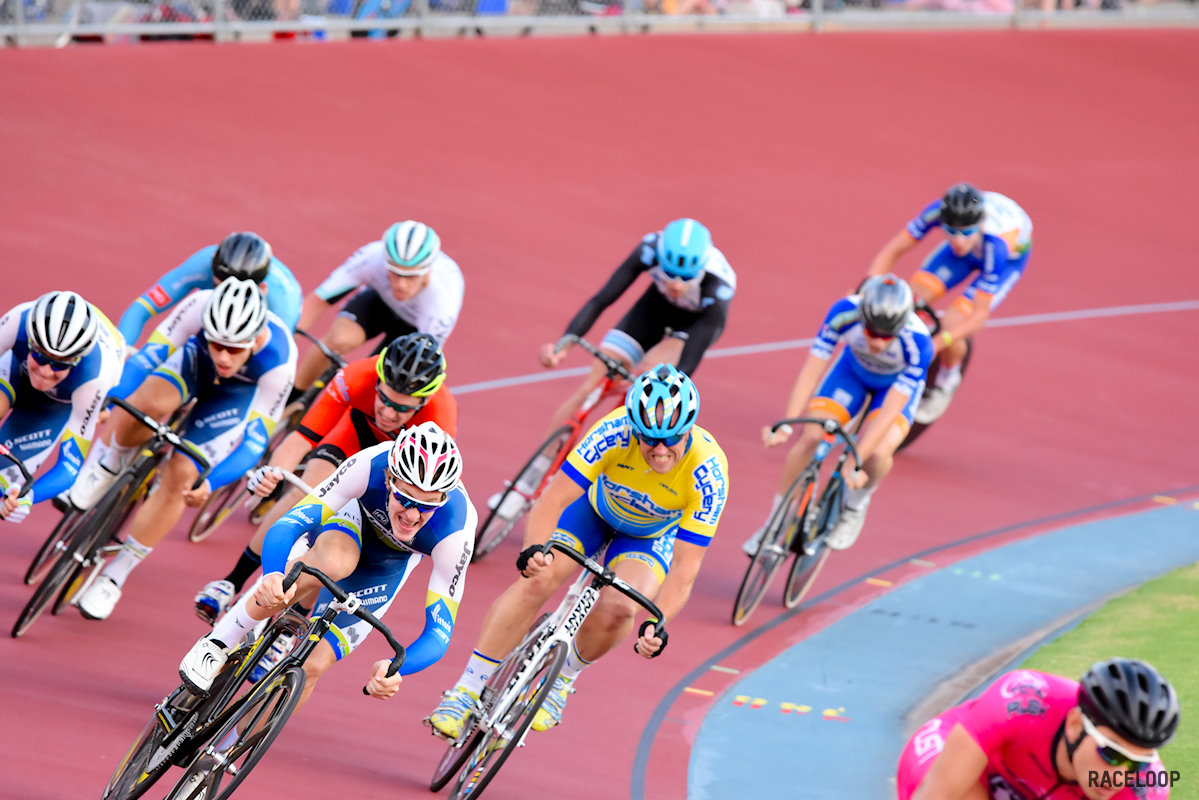 The Scratchies have caught the middle markers and it’s now every man for himself. 2016 World Team Pursuit Champion Callum Scotson is driving as hard as he can at this point. For some of the riders, their work is done.

Like Loading...
Category: Racing
Tags: Bendigo Madison, gallery, racing, track, Wheelrace
We use cookies on our website to give you the most relevant experience by remembering your preferences and repeat visits. By clicking “Accept All”, you consent to the use of ALL the cookies. However, you may visit "Cookie Settings" to provide a controlled consent.
Cookie SettingsAccept All
Manage consent