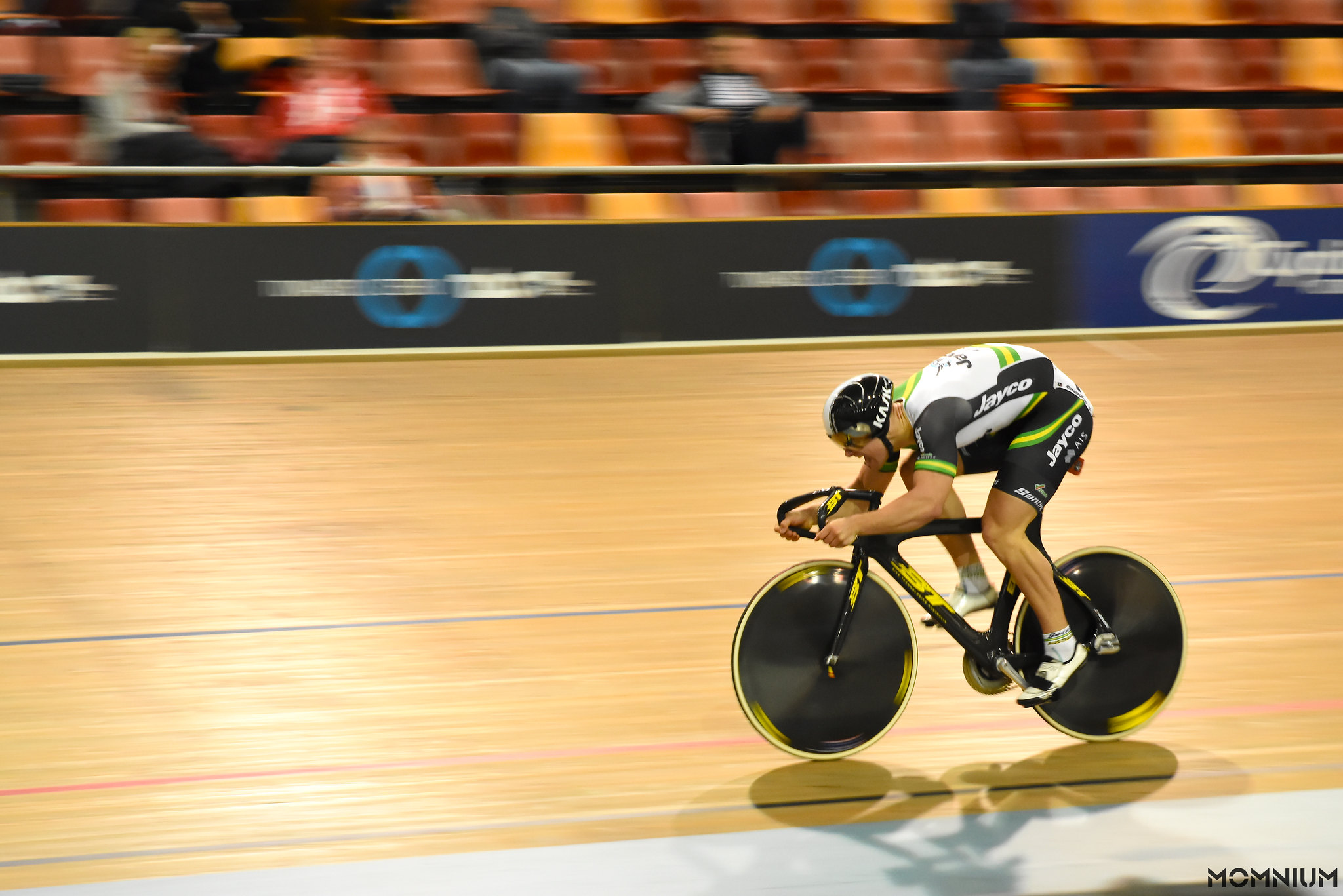 Track sprinters are a different breed. Whereas endurance racers are required to repeatedly work and recover, track sprinters are ordinarily done in around 20 seconds after a single maximal effort. Both flying 200s and match sprints are done in around 15-20 seconds of maximal effort with maximum speeds hitting around 70-75km/h. Although Keirins are longer, it all comes down to the final two and a half laps which sees maximal efforts lasting for around the same time and maximum speeds up around 75km/h. At altitude, this may even go as high as 80km/h.

For years, track sprinters chose small gears so they could achieve the maximum “jump” on their opponents. However this idea was only part right and over the past 15 years riders have realised that holding maximum speed is also important. As a result, modern sprints have seen gear ratios gradually increase from the low 90s to low 100s in around 2006 to where they are today. Malaysian Commonwealth Games gold medalist Josiah Ng explained that it was Scotland’s Sir Chris Hoy who changed the way sprints were raced. His incredible strength saw him able to simply use larger gears to drag off his opponents from early on in the race. Huge gears, faster speeds, for longer.

Ng revealed, “I started my career in the 2000 riding 49×14 and ended my career mostly in 2015 using 51×12. I was always one of the riders with the smallest gear choice. Amazing how the sport evolved over 15 years.” Hoy’s influence caused a huge shift which has probably changed the face of sprinting forever.

During competition, depending on the rider’s style, each elite rider will typically choose a gear within a range of ratios to reflect their personal characteristics. One thing is for sure, a big part of sprinting is raw strength. The ability to push big gears quickly.

During the flying 200 meter qualifiers (three laps where the final 200 meters is timed), gearing tends to be far bigger. With two laps to wind up to speed there is no need for high acceleration and riders ride noticeably higher gear ratios. Put simply, riders are trying to hit their maximum speed and then hold it for as long as possible. At the upper end of the range, Eddie Dawkins of the New Zealand team pushed 135 inches at 119 rpm to qualify in a time of 9.8 seconds at the recent World Track Cycling Championships in London. 135 gear inches equates to a 60×12 gear!

After qualifying, elite sprint riders will tend to gear down. In addition to the improved acceleration afforded by “smaller” gears, riders are required to rider several rounds and using a smaller gear will help riders to recover between rounds. However these gears are still big – far larger than what an endurance rider would ride.

Gearing generally tends to increase from match sprints to the the Keirin. The Keirin runs for much longer and speeds are higher because riders are first brought up to speed by the derny. This creates a far higher “launch” speed from which to start racing.

Like Loading...
Category: Technical
Tags: gearing, sprint, technical, track cycling
We use cookies on our website to give you the most relevant experience by remembering your preferences and repeat visits. By clicking “Accept All”, you consent to the use of ALL the cookies. However, you may visit "Cookie Settings" to provide a controlled consent.
Cookie SettingsAccept All
Manage consent