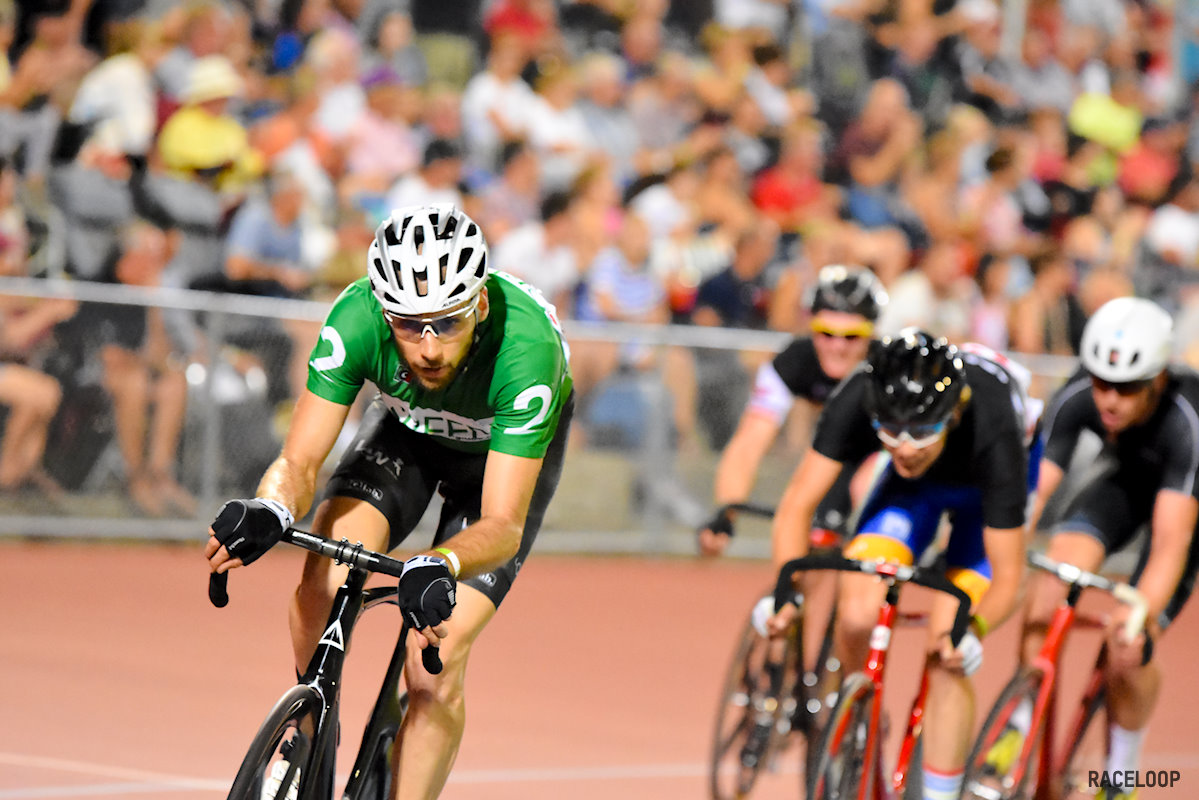 After a tortuous 30 lap chase, Fitter and Scotson reached the bunch with just 5 laps to go. On points, the lead was theirs and they leap frogged Grassman and Stöpler for the win. One of the best, if not the best, nights of racing I’ve seen in years. 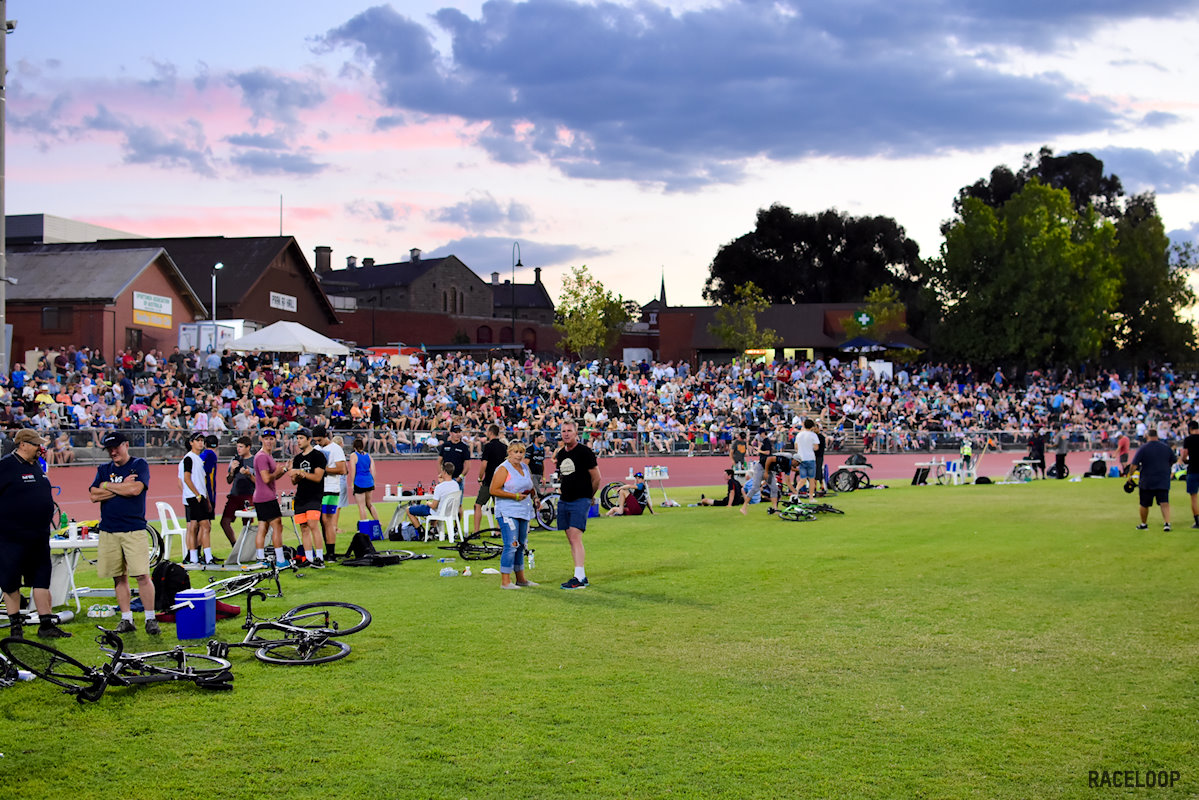 The crowd at Bendigo was incredible. A perfect 27 degrees and not a rain cloud in sight meant the scene was set for some sensational racing. Racing in Bendigo is a world to its own where it feels like the whole town gets behind it. The ambience inside the velodrome was beautiful and everyone could feel the excitement building before the race. 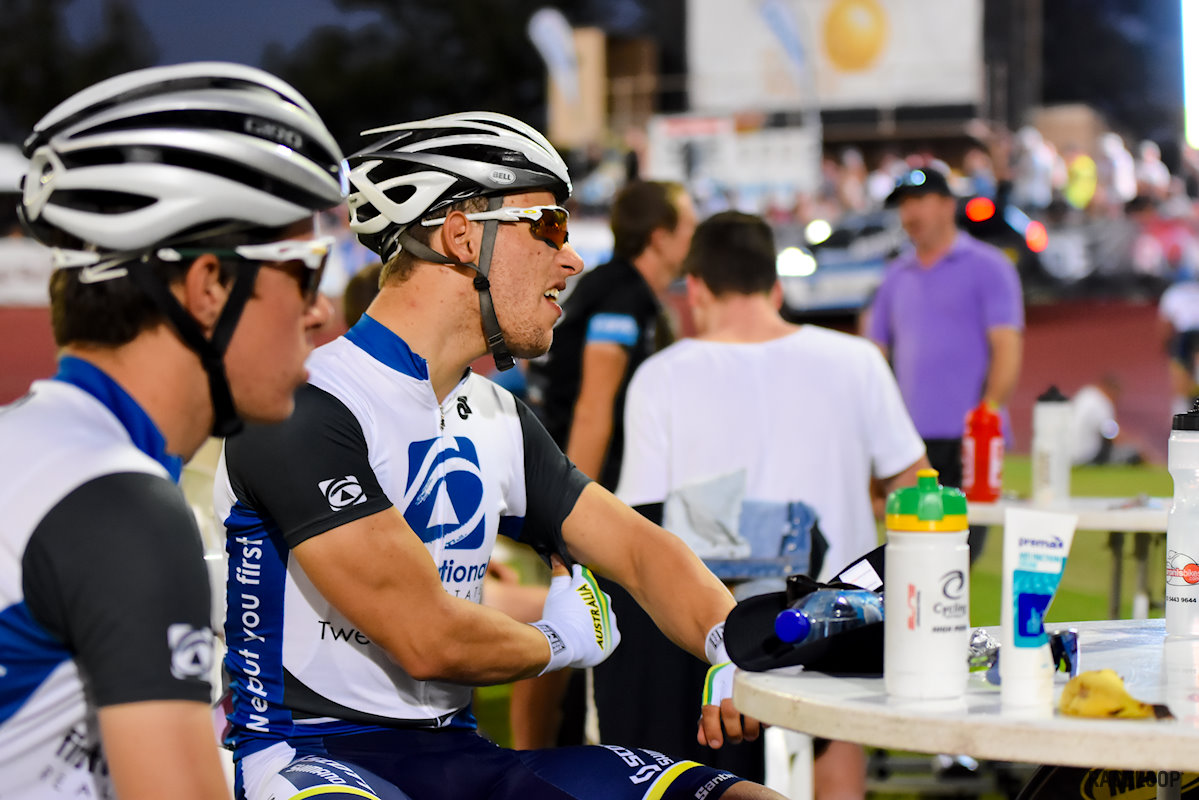 Sam Welsford (WA) and Miles Scotson (SA) were amongst the pre-race favourites. Both of them are the current Team Pursuit World Champions and no one doubted their potential to win. In the end they were third but in doing so they helped Callum Scotson (SA) and Daniel Fitter (QLD) take their third lap for the win. 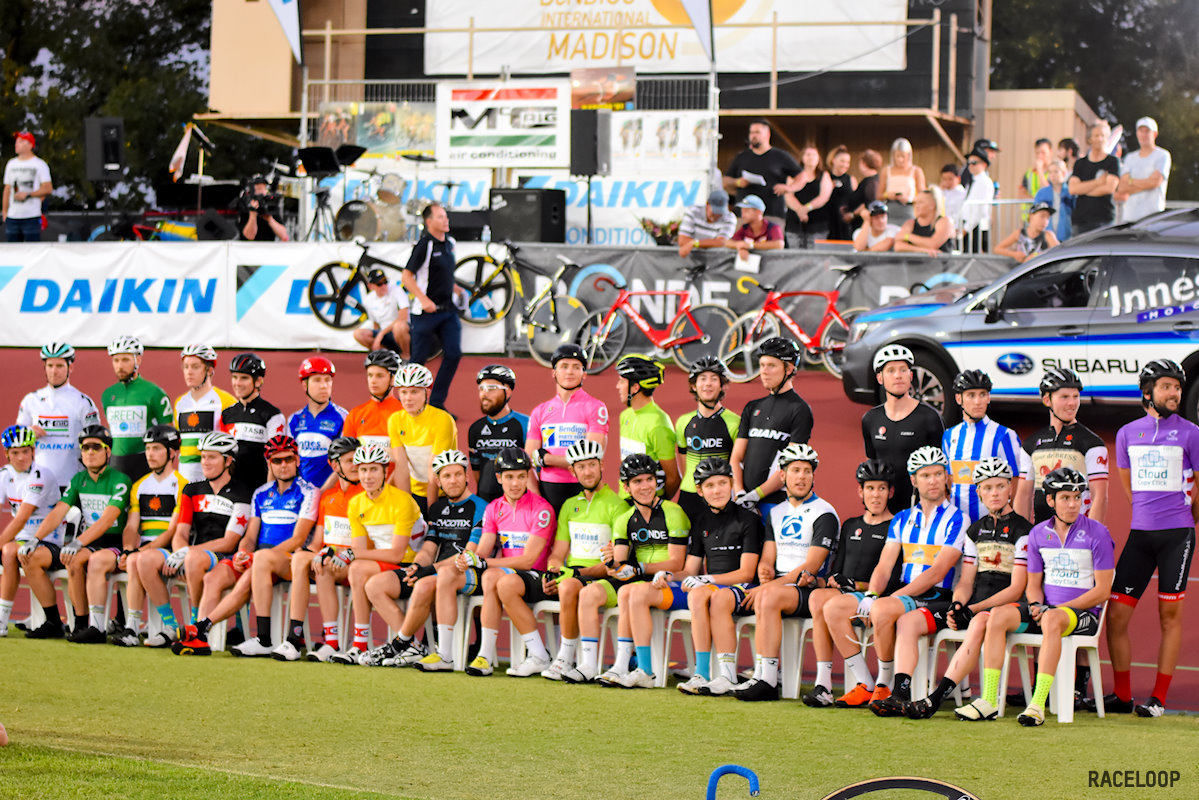 A lighter moment before the racing started to take the traditional class photo. Here everyone was ready and waiting for Miles Scotson. It was all pretty funny to see but I think more than a few of the riders just wanted the action to begin. 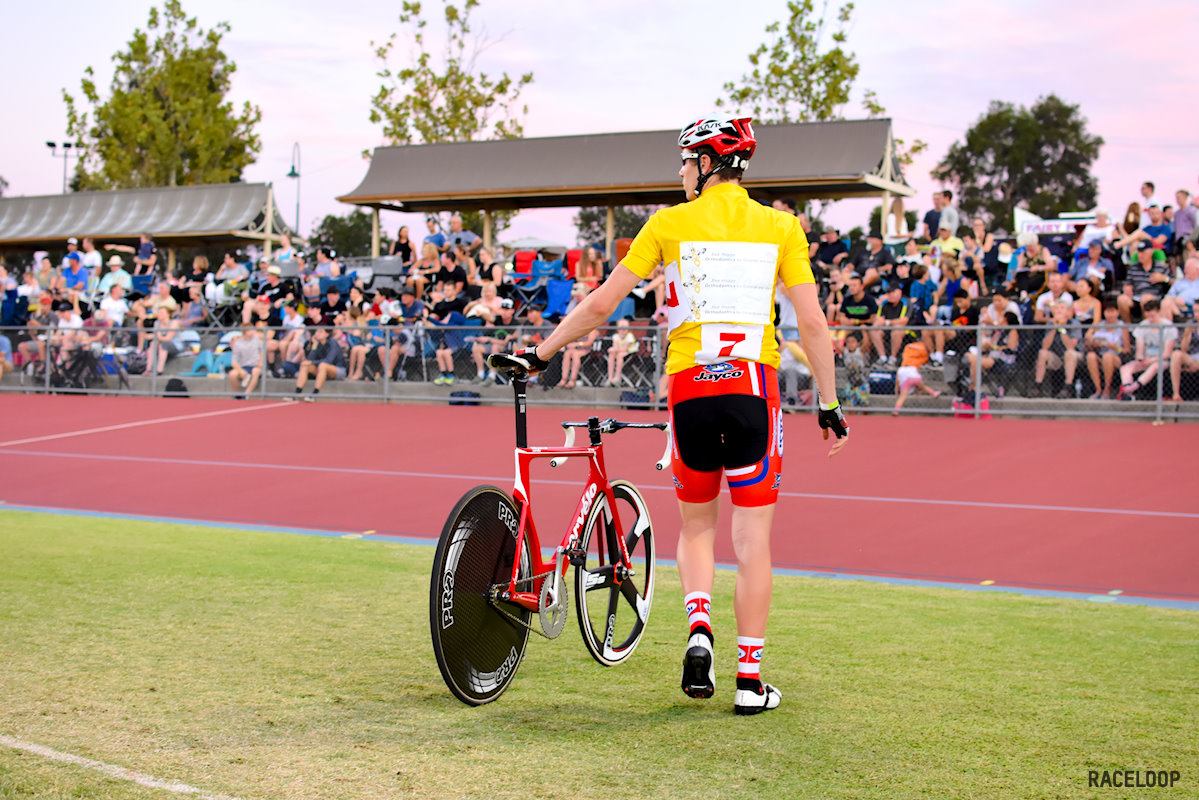 Looking fresh and ready for battle, Rohan Wight steps over to the track. The current World Junior Madison Champion knew what lay ahead. 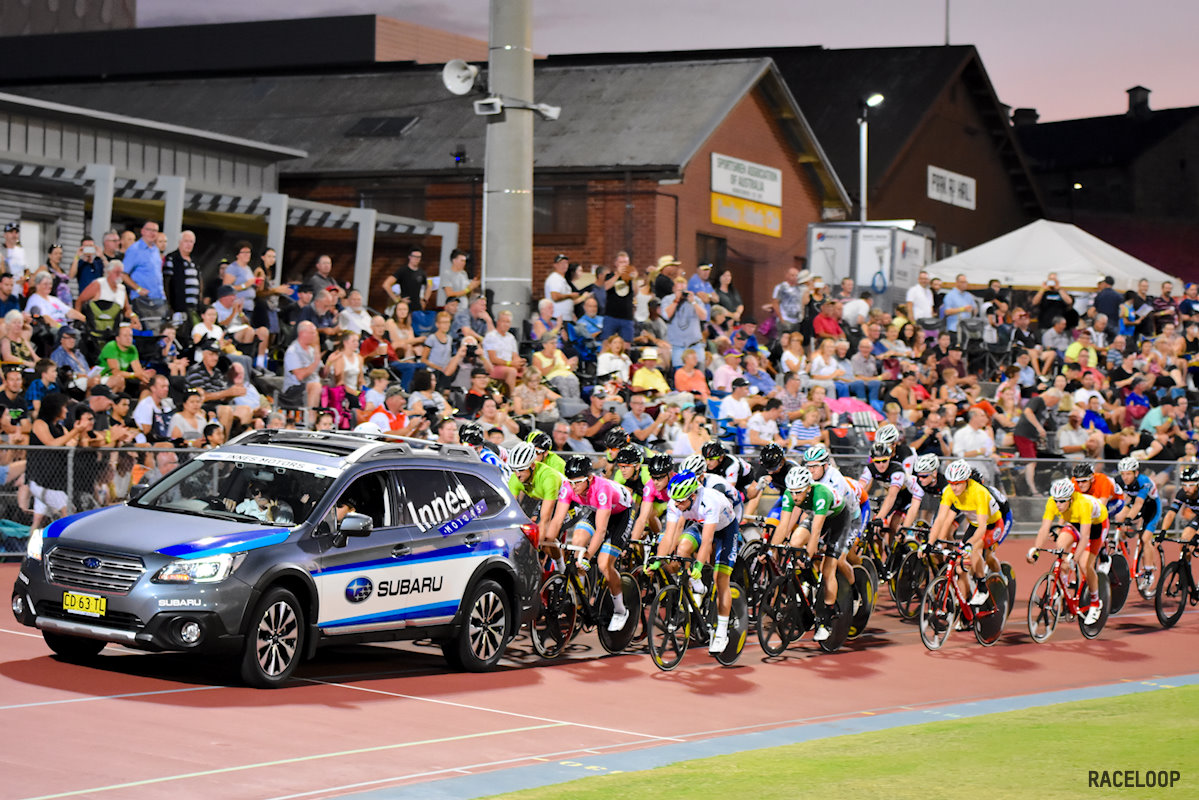 The lead out car opens the race whilst the riders are paraded around in tow. It’s the perfect suspense builder for the opening of the madison. Somehow, you knew something good was about to happen. 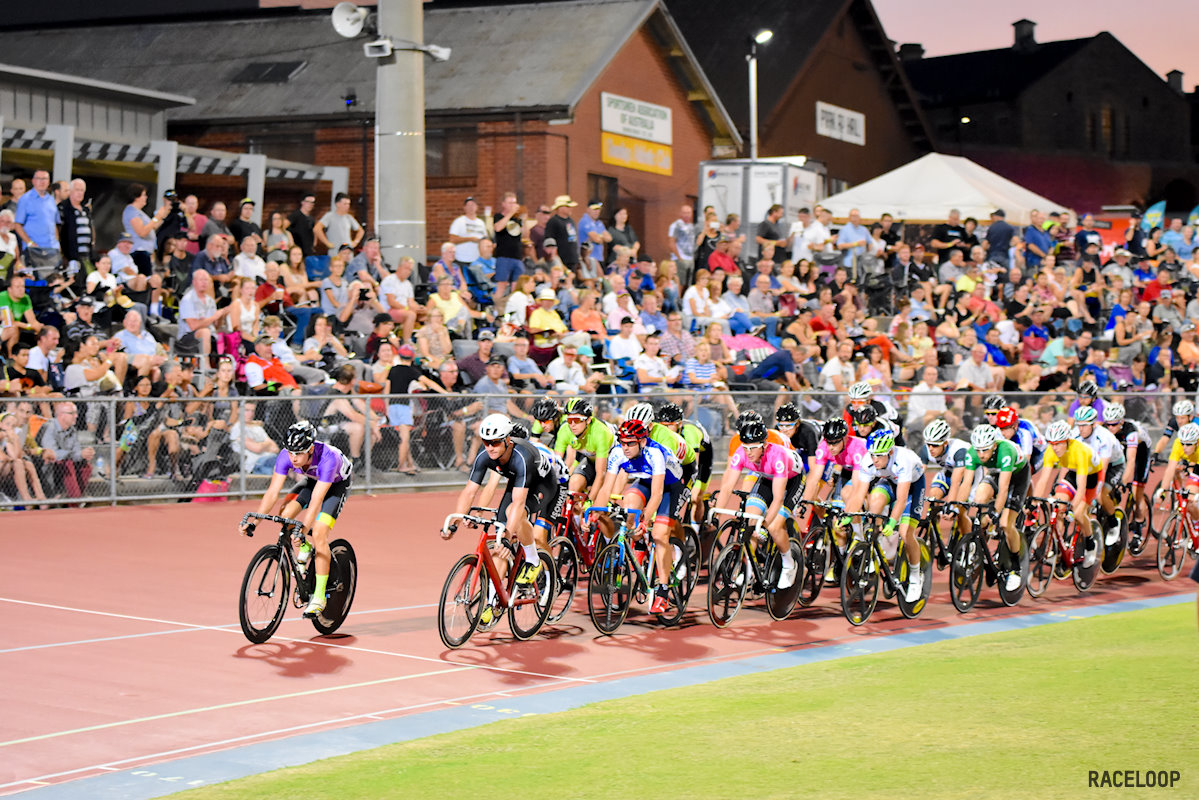 In the opening laps the riders just watch each other and wait for the first attack. Here Luke Parker (VIC) leads the peloton into the race after the lead car pulls off. Watching the riders wind up to race speed is something to behold as the hum of disc wheels and whirring of chains builds in intensity. 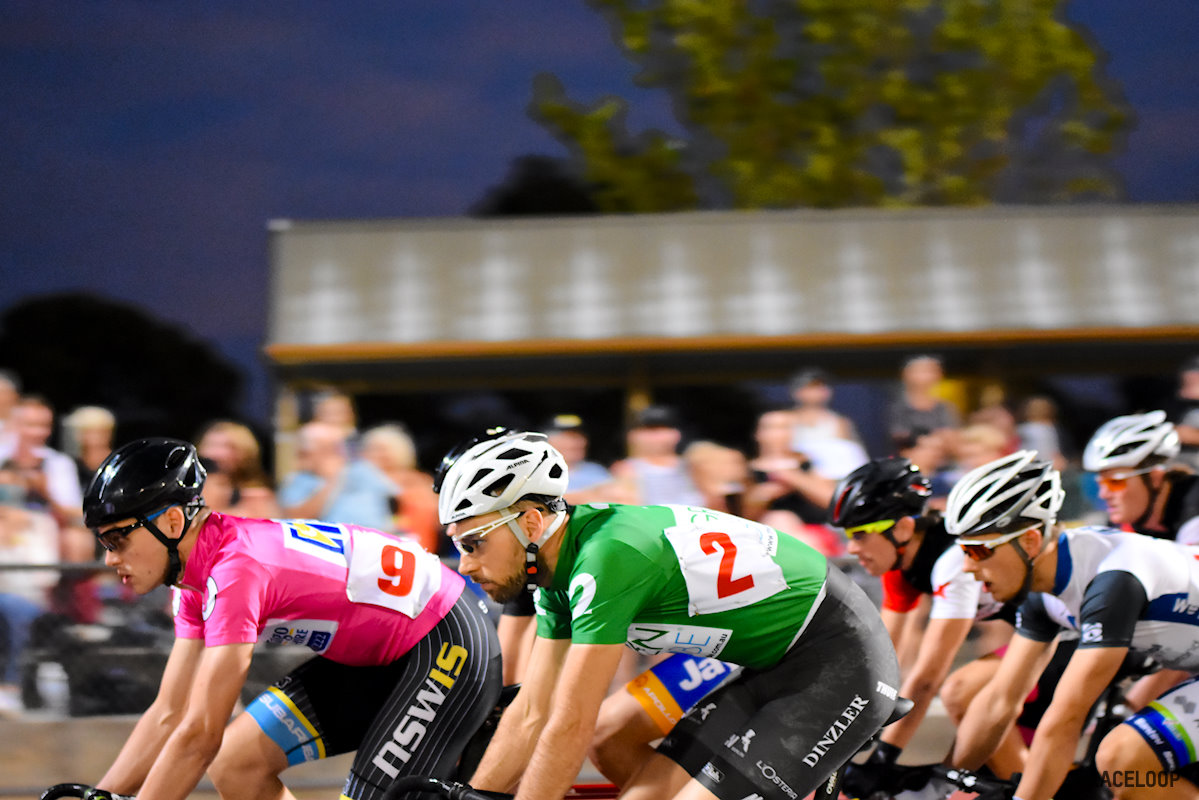 The racing begins just before the sun sets but it doesn’t take long before the darkness settles in and the mood intensifies. It’s amazing what a difference the darkness makes to the atmosphere inside the velodrome. 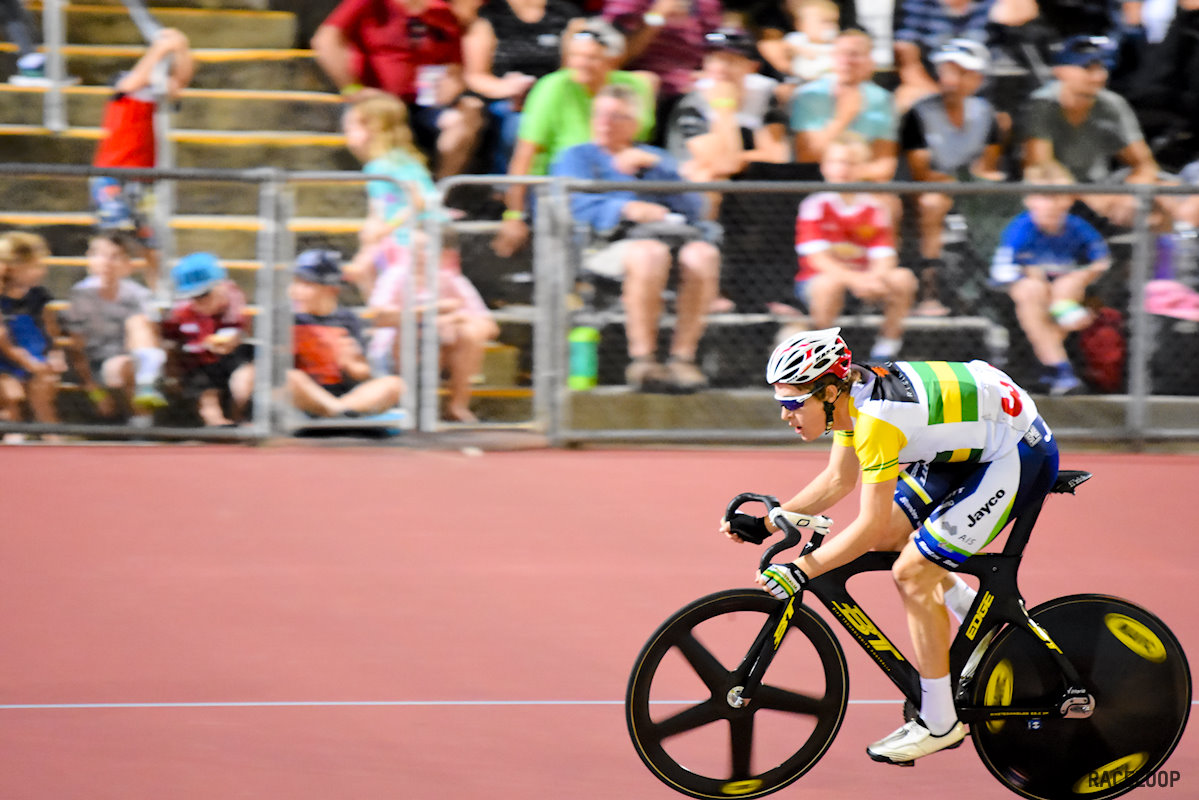 In the first of his three laps taken Callum Scotson always looked smooth and strong. On good form after his World Team Pursuit title two weeks ago I felt privileged to see him racing again. 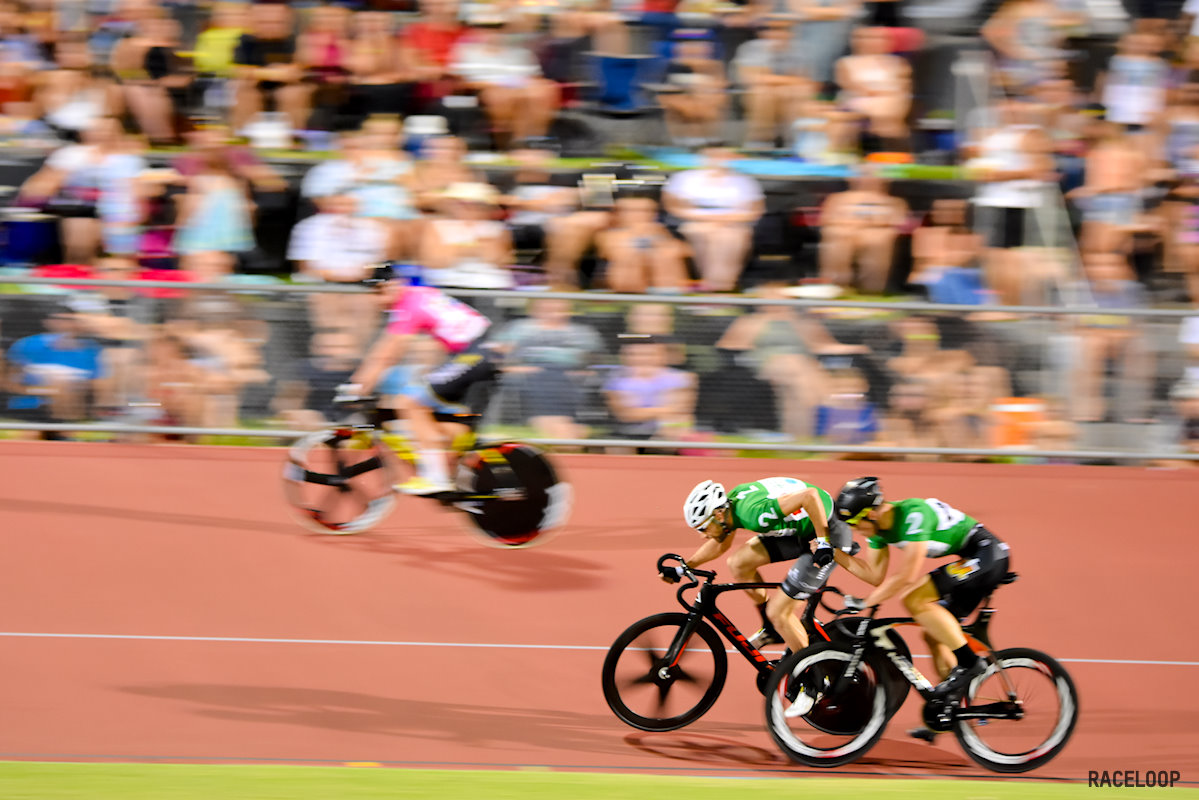 Within the first 15 laps Christian Grassmann (GER) & Nick Stöpler attacked hard. It happened so quickly. The bunch was together and in the next moment the boys were half a lap up and going for it. I’m not sure why the likes of Scotson & Fitter, O’Shea & Edmondson, Welsford & Scotson and O’Brien & Ross let them go. Either they were caught unaware or they were conserving themselves for later. It was a big gamble wither way. 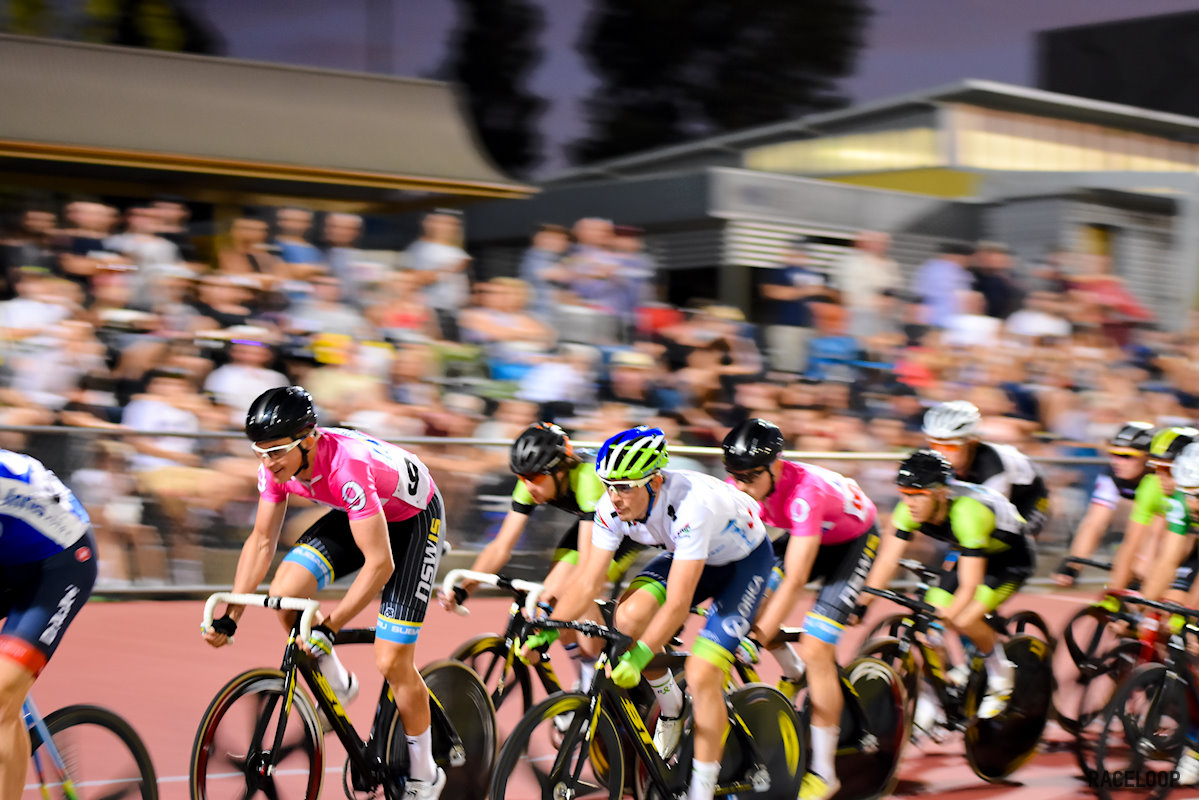 The two brothers from NSW, Jackson and Scott Law (pink jersies) finished off in 7th place. It’s not just about the racing. In front of a packed house Scott Law (right) showed why he is the main man in the eyes of many. Initially his girlfriend Imogen thought she was on stage to officially open the carnival with Scott, but he had other ideas. The sprint sensation got down on one knee and asked her to marry him. When Imogen immediately said “yes” the cheer from the crowd was massive. Respect to this cavalier of the old school. 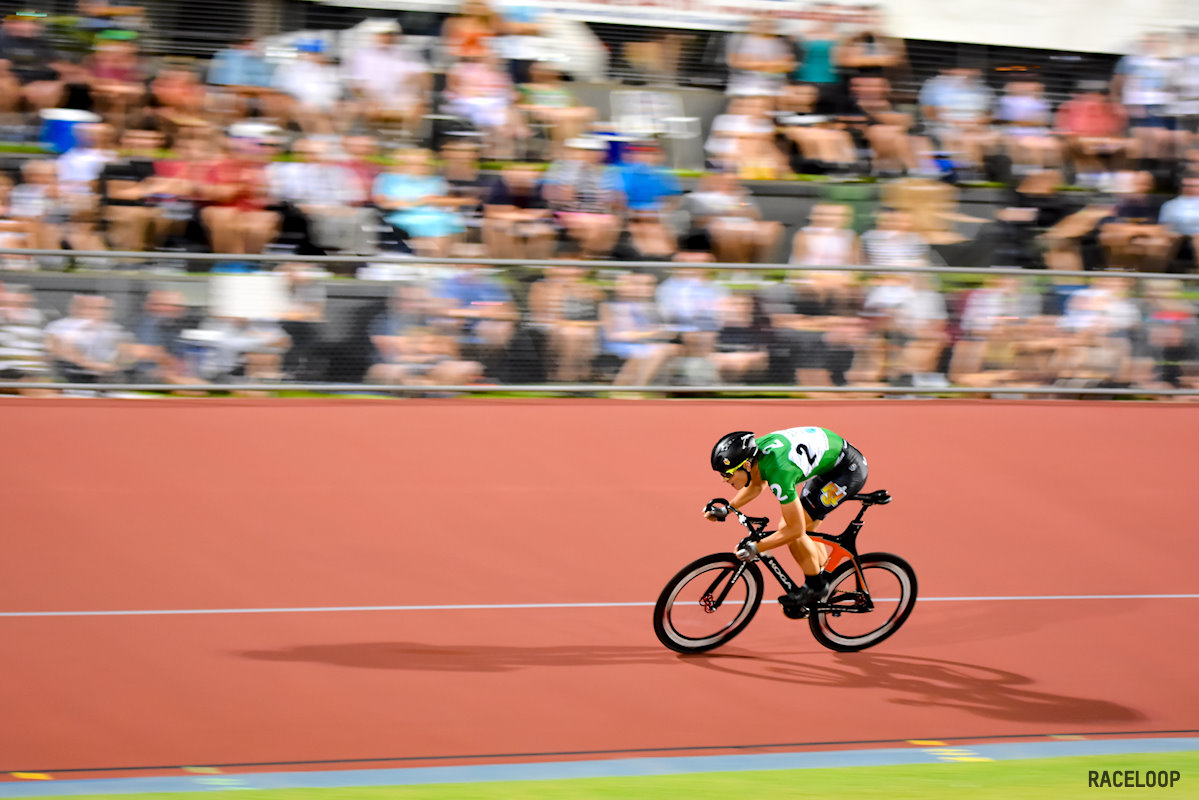 “I could kill Christian Grasmann for attacking in the beginning, it took 40 Laps to take the first solo lap…and that was just the beginning.”
The aggression of Nick Stöpler (NED) and Christian Grassmann (GER) was off the dial. They attacked early whilst everyone was on fresh legs and the pace was high. They attacked mid race. And they attacked again when it looked like they were spent. Throughout the race, these two demonstrated their class, tenacity and why they are currently two of the world’s best Madison riders. 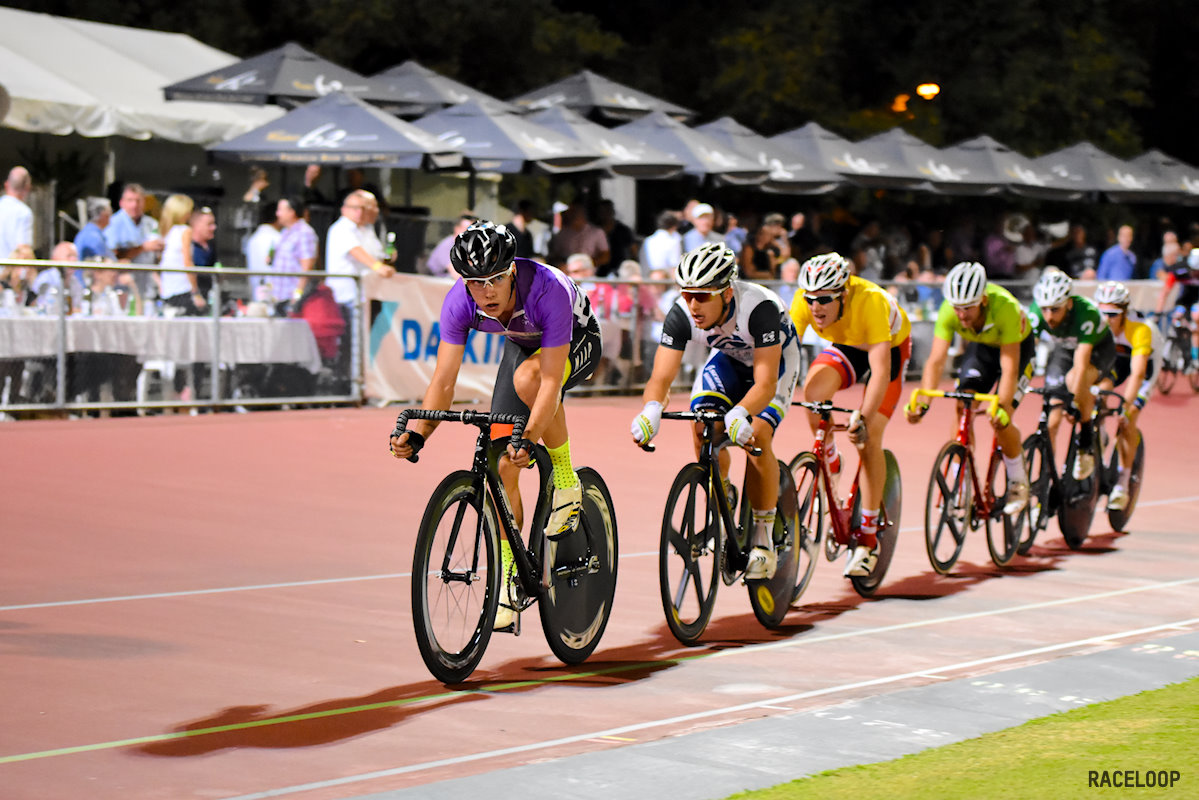 Together with Harry Carpenter, former Austral Wheelrace winner (2012) Luke Parker was back on the track and showing his class. Although he was not in contention for the win, Luke has only recently returned to the track after spending the last few years racing the road in Europe. Given this background, it’s fair to expect that this kid is one to watch. He looks so smooth on the bike, almost effortless. 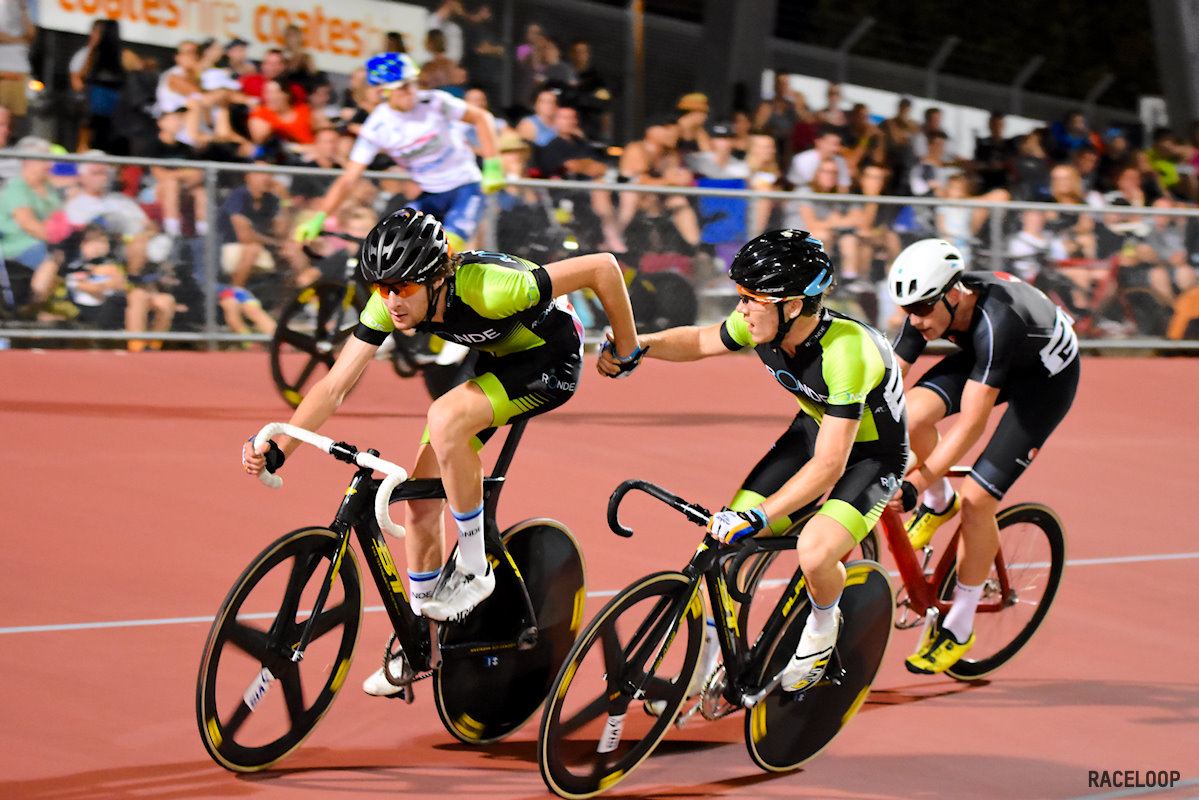 The youngest riders in the race, 16 year olds Riley Hart (VIC) and Godfrey Slattery (VIC) stepped up and gave it their all. Although they were several laps down these two are the clear pick for the future. Pure bike riders! 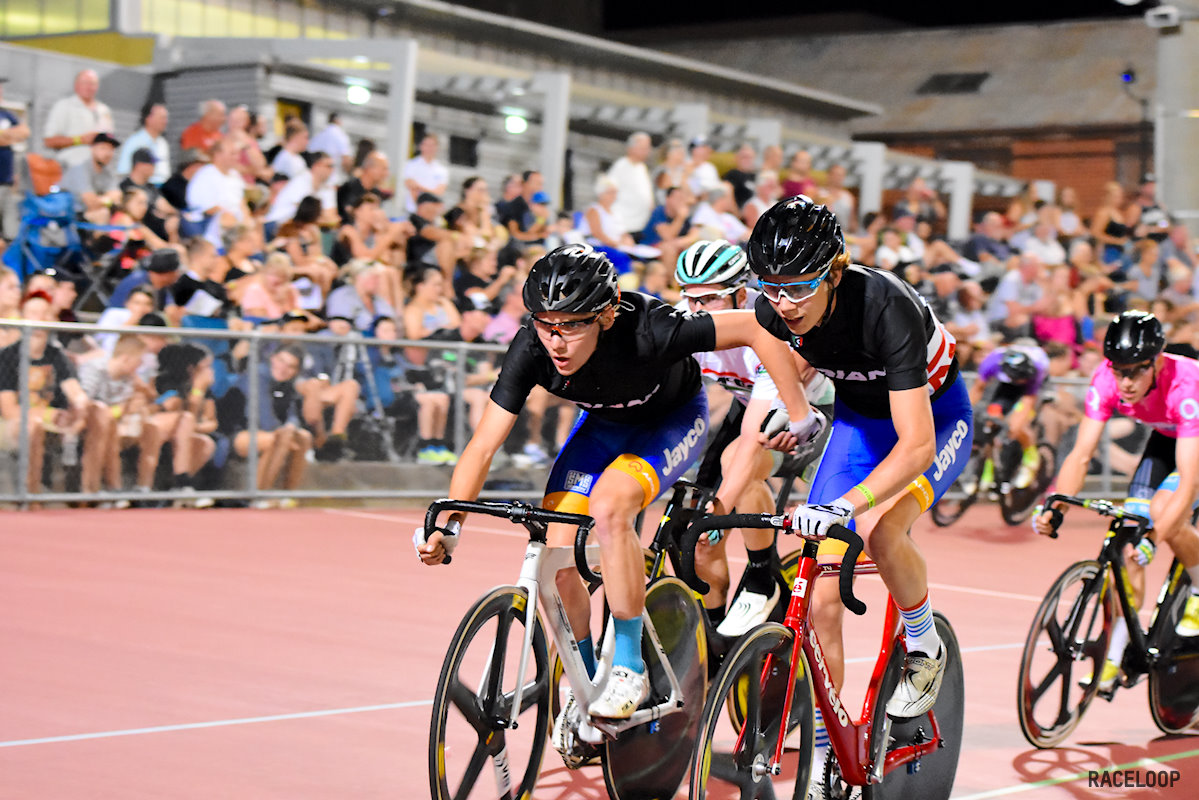 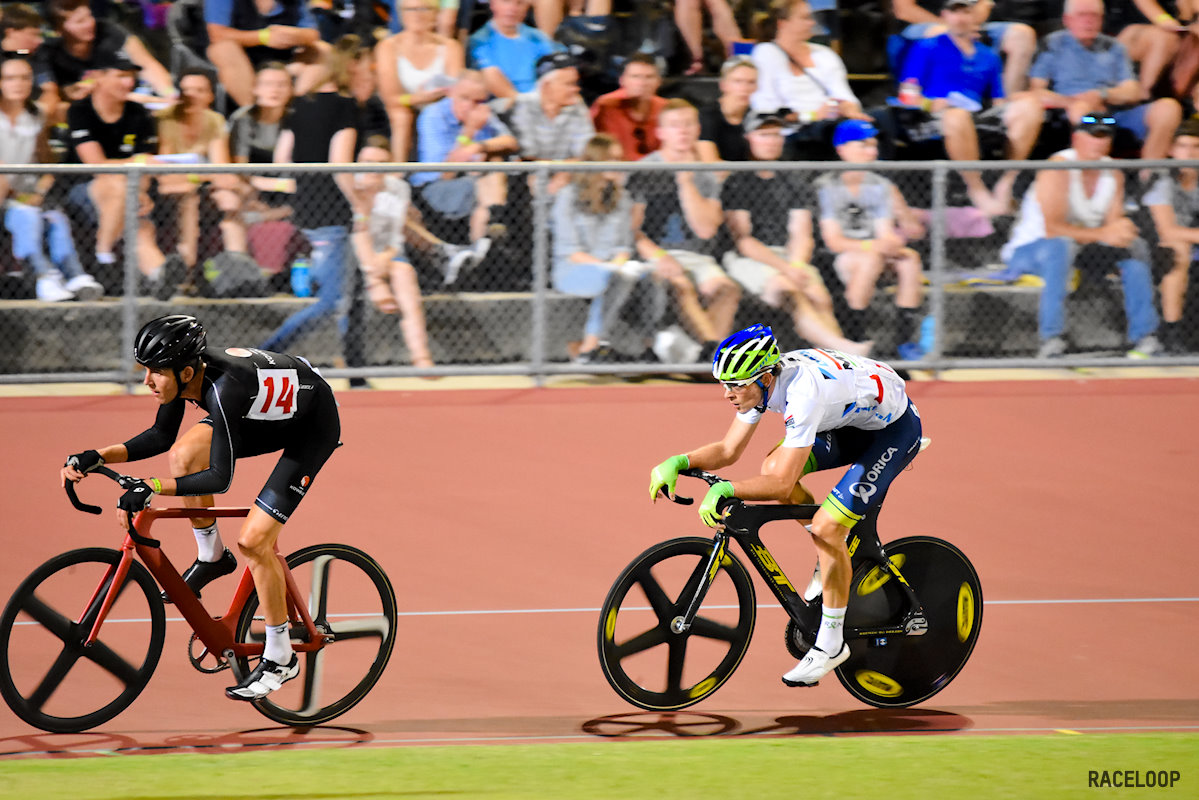 Mark O’Brien (VIC) leads Alex Edmondson (SA) in the chase for Scotson and Fitter. Although Edmondson was paired with Glenn O’Shea, they didn’t really shine through in this year’s race. They have their eyes set on a bigger goal – the Rio Olympics in August. 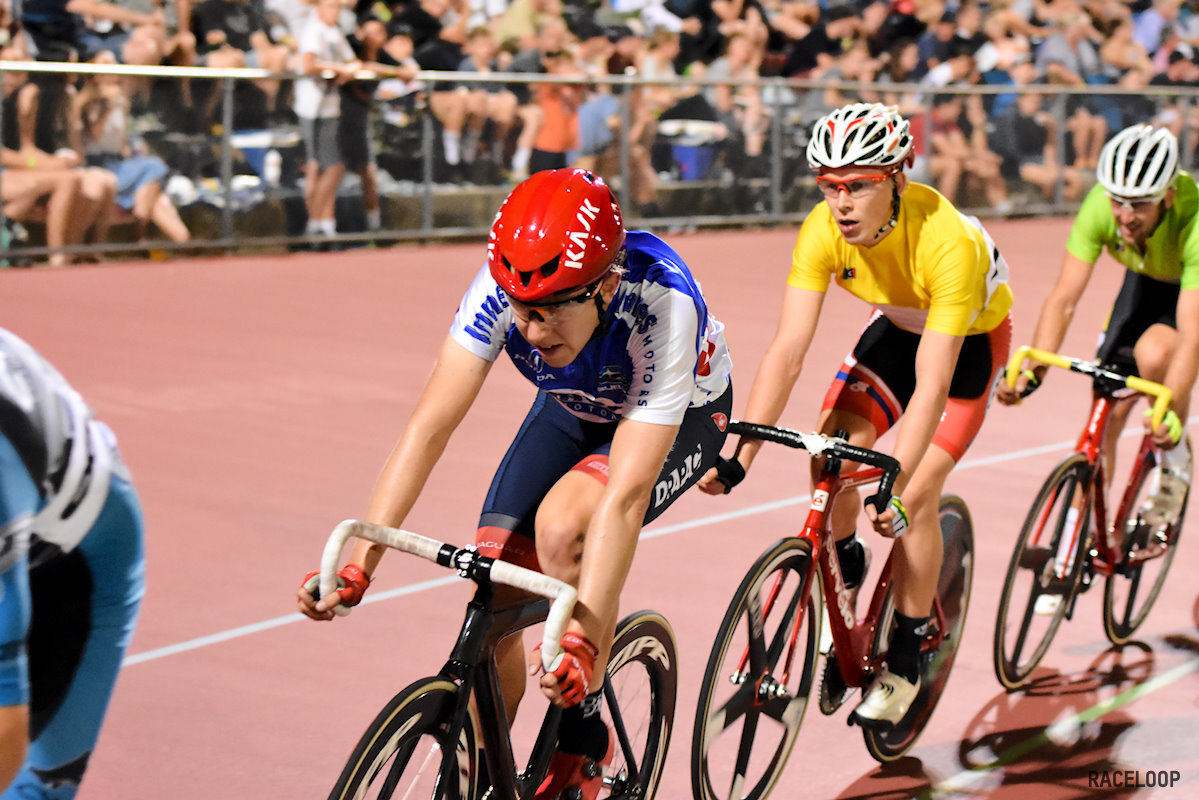 Tour of Tasmania 2015 winner and 2015 NRS standout Brad Evans (NZL) held on for 10th place. Riding with together with Drapac team mate Grameme Brown (Olympic Madison Champion in 2004) Brad told me before the race “I haven’t been on the track bike since last year’s Bendigo Madison”. Somehow I sensed that he knew he was in for a brutal night of racing. 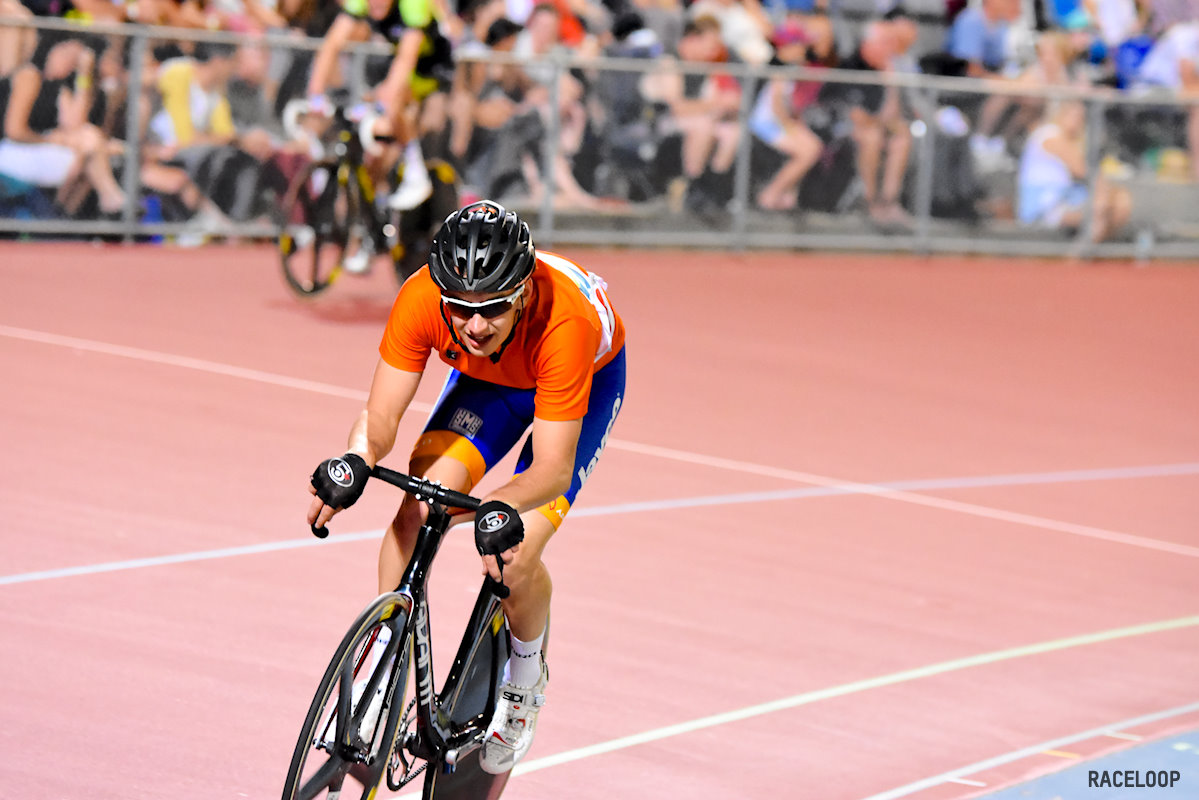 After narrowly missing out on the National Junior Sprint team, Tom McFarlane returned to the Bendigo Madison to show his raw talent. An incredibly versatile rider, Tom is one of the few riders who can win a Keirin one day and slip into a Madison the next. 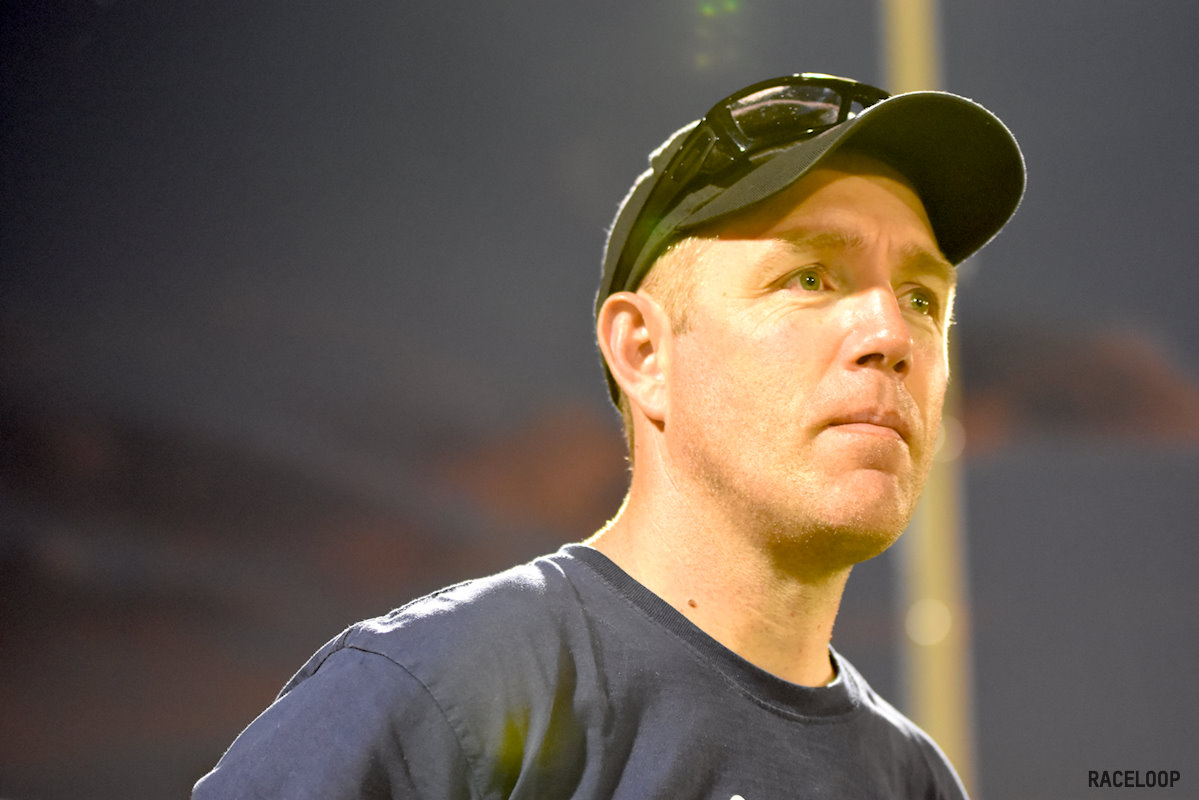 Victorian Institute of Sport coach Shane Kelly was intensely watching the action unfold. With Matt Ross & Kell O’Brien in podium contention there was no room for screw ups. All round nice guy, Shane is a former world champion, an Olympic medalist and he gives the boys he looks after incredible support. From an outsider’s perspective, I can see that his riders all utterly respect him. 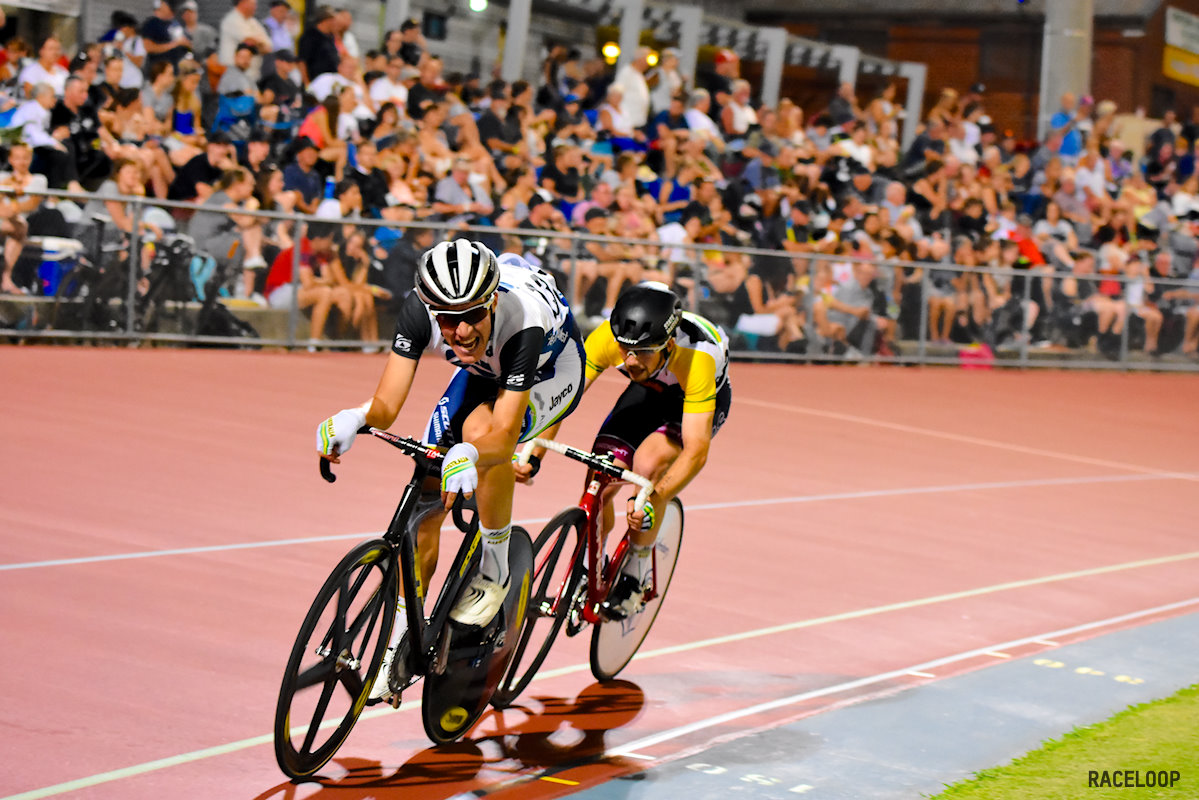 For the team of Grassman & Stöpler, the race could only be described as a “Thriller Tradgey”. They came so close and they would have won it if it wasn’t for the persistent 30 lap chase of Scotson & Fitter and Scotson & Welsford. The look of pain on Miles Scotson’s (SA) and Daniel Fitter’s (QLD) faces shows the effort they put in to take that final lap whilst winning all the points along the way. 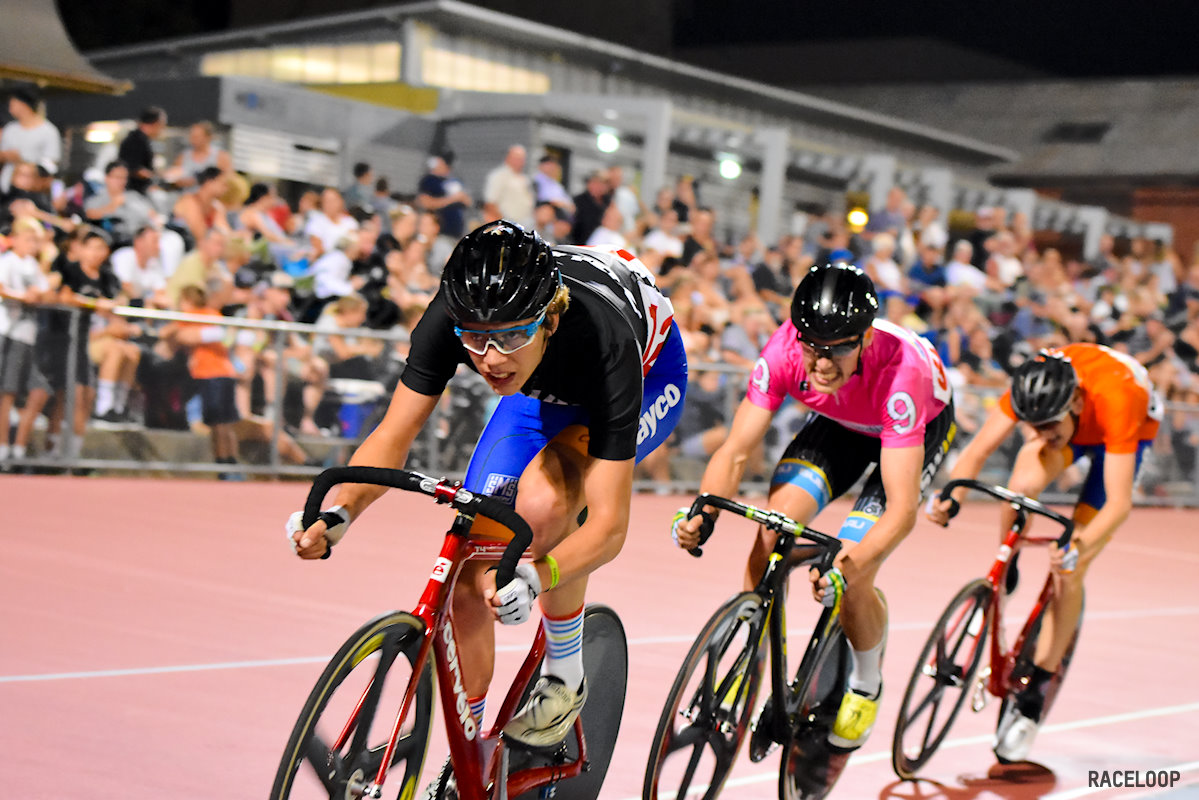 Kell O’Brien together with Mat Ross chased as hard possible but it was still not enough to hold off the team of Sam Welsford and Miles Scotson. In any case, they put on a performance of brilliant riding. Still a junior, Kell is off to Switzerland in August to try and back up his two world titles from last year. 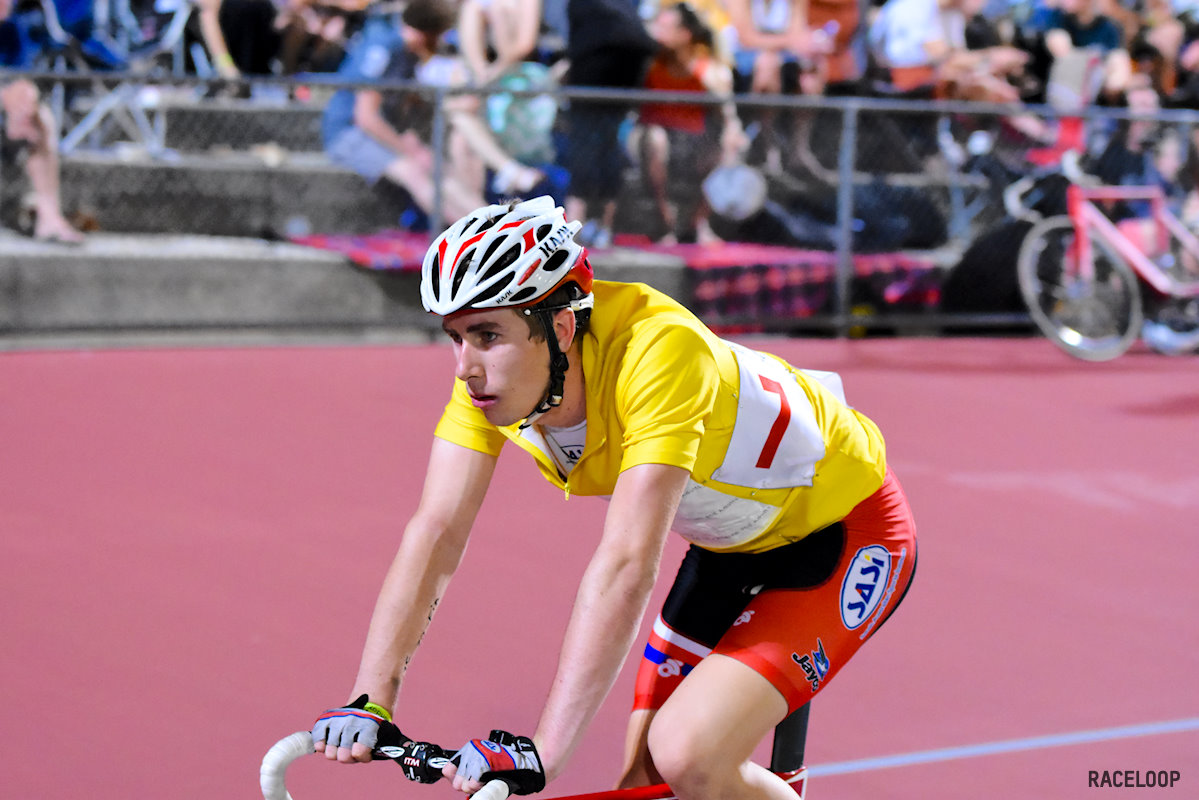 The look on Rohan Wright’s face told me just how hard it was. He was dazed and totally spent. Usually laughing and joking, all he could say was “I’m done”. Together with Alex Porter, the 2015 Junior World Madison Champion put in a full effort to finish 11th overall and 3 laps down. To see a rider of Rohan’s stature in such a state really gave me an feeling of just how hard it was. 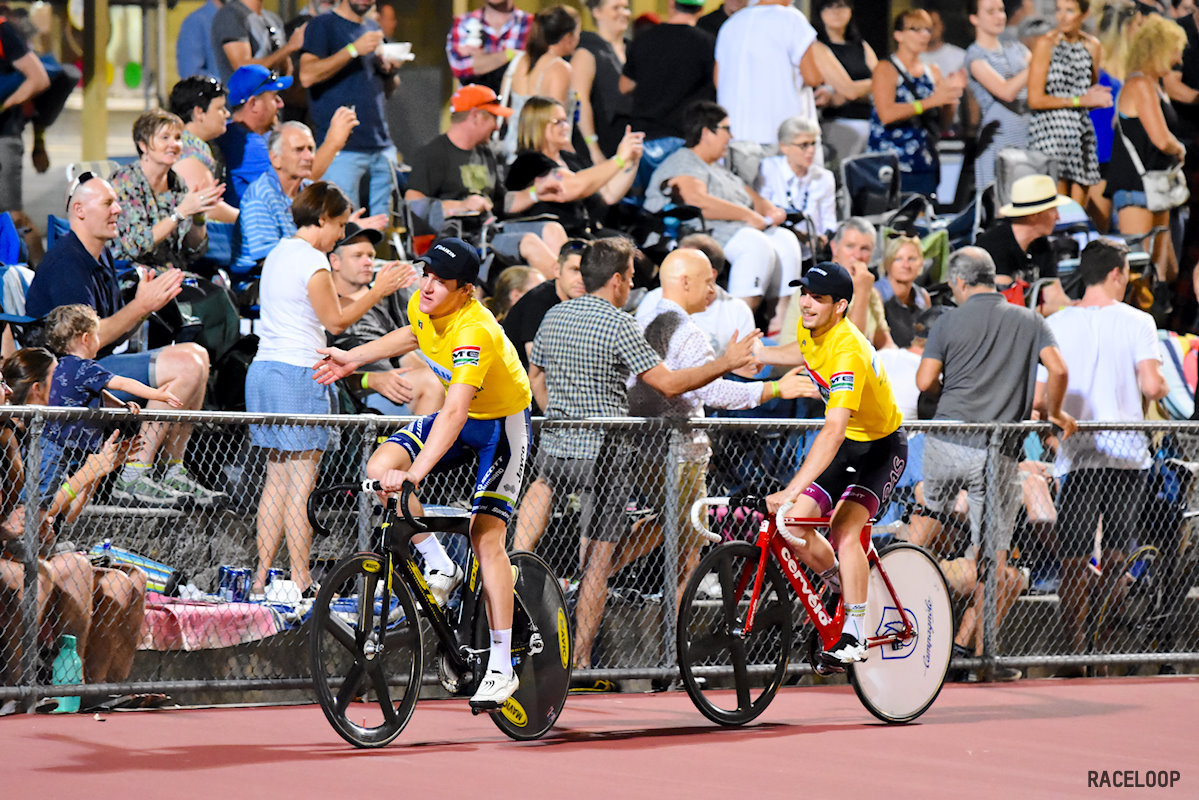 Elated with their well deserved win, Callum Scotson (front) and Daniel Fitter enjoy their success with the crowd. Bendigo really is the last of the big Victorian country track carnivals.

Like Loading...
Category: Photography
Tags: Bendigo Madison, photos, racing, track, track life
We use cookies on our website to give you the most relevant experience by remembering your preferences and repeat visits. By clicking “Accept All”, you consent to the use of ALL the cookies. However, you may visit "Cookie Settings" to provide a controlled consent.
Cookie SettingsAccept All
Manage consent