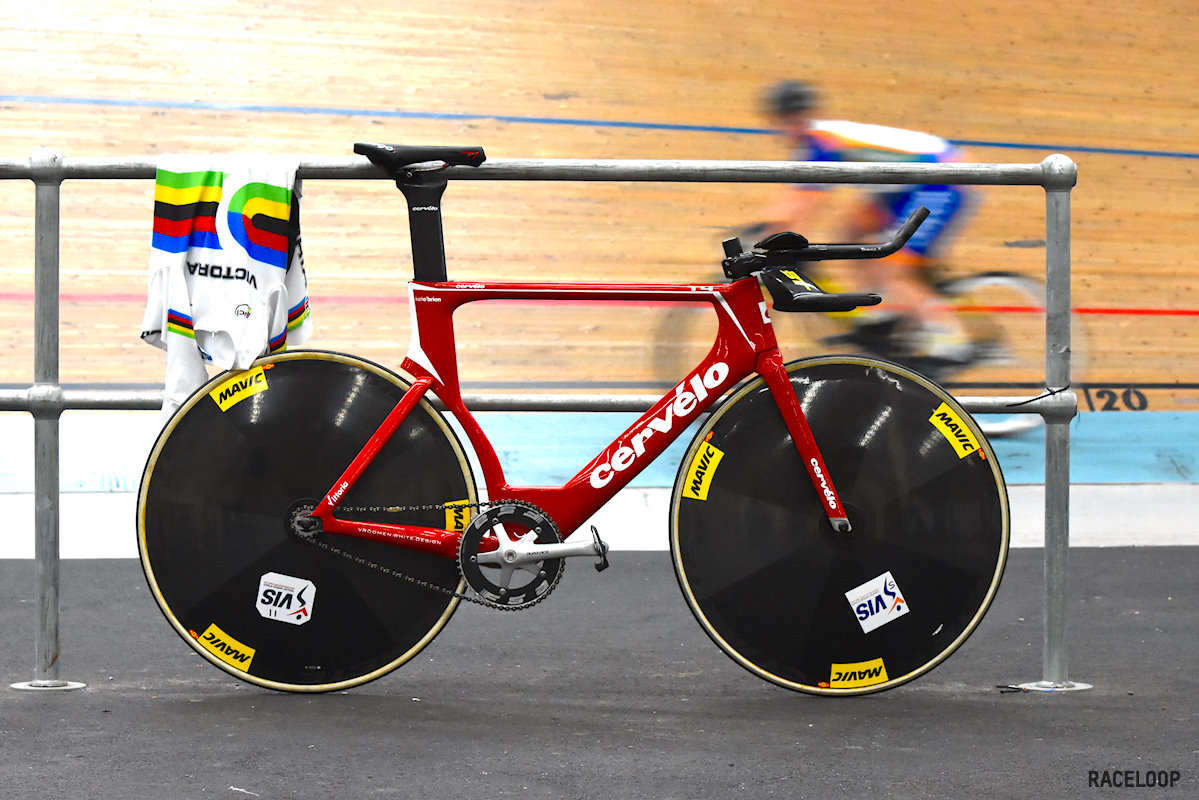 Note: Kell O’Brien won the 2015 Junior World Championships Gold in the Team Pursuit & Madison along with bronze in the Individual Pursuit. He also won the prestigious Champion of Champions award – the prize awarded to the most consistent rider (U19 & Elite) at the Australian Track Cycling National Championships.

With all the new bikes being unveiled before Rio it’s easy to lose sight of the fact that these bikes offer marginal improvements on what were already aerodynamic super machines. The Danes have their new Argon 18s which appear to have been modelled on their previous Cervelo T4s (which probably tells us something about the T4), the US Female Pursuit team has their radical new Felt Team Pursuit machine, the Aussies have their updated super low frontal area BT Ultras and the British team have yet to announce what could be a new and improved Cervelo.

With all the current discussions surrounding the massive amounts of money being spent by the world’s track cycling super powers in the chase for Olympic Gold, back in the real world athletes can still obtain off the shelf machines worthy of a World Championship winning ride. As anyone who reads these pages will know, part of the beauty of track cycling lies in the fact that equipment plays a far smaller role in the outcome of each event than what it does in other disciplines of the sport.

One such example of a commercially available machine is the Cervelo T4 as ridden by 2015 dual World Junior Champion, Kell O’Brien of Australia. This bike is set up with top end yet fairly standard equipment easily available to any rider. O’Brien is not sponsored by Cervelo so when he chose his new bike he simply looked for a frame that would provide him the best fit and stable handling.

As O’Brien put it: “The Cervelo is the best all round bike for track cycling as it provides the best fit. All I need to do for switching between my bunch position and pursuit position is just a change of bars. It’s really easy. It’s also incredibly stiff which is great for all the events I ride.” 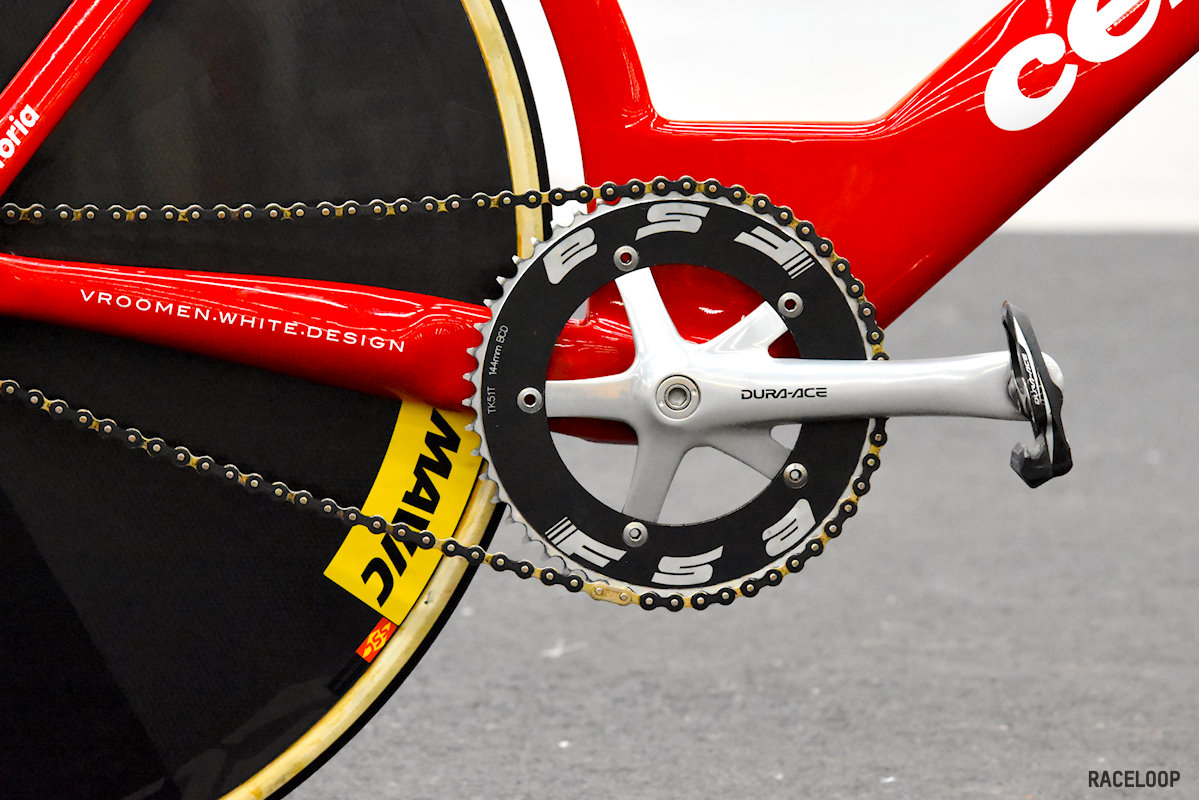 The bike uses standard Dura Ace 172.5mm cranks. (Note: Since these photos were taken, O’Brien has now started using an SRM power meter.) O’Brien runs this crank length for both pursuiting and bunch events. The chain is an Izumi Super Tough coupled with a connector link. The Super Tough is reliable, strong and includes a handy connector pin for quickly changing chains (although O’Brien has replaced it with the connector link). This is also the chain used by the Australian National Elite Track Team which reflects its quality.

The bottom bracket drop on the T4 is 60mm which is around 10-20mm more than most other track frames on the market. This places the rider closer to the ground which adds to the frame’s handling stability and improve’s aerodynamics at speed. This lower bottom bracket design is a real departure from traditional track frame design which calls for the clearance provided by a high bottom bracket. 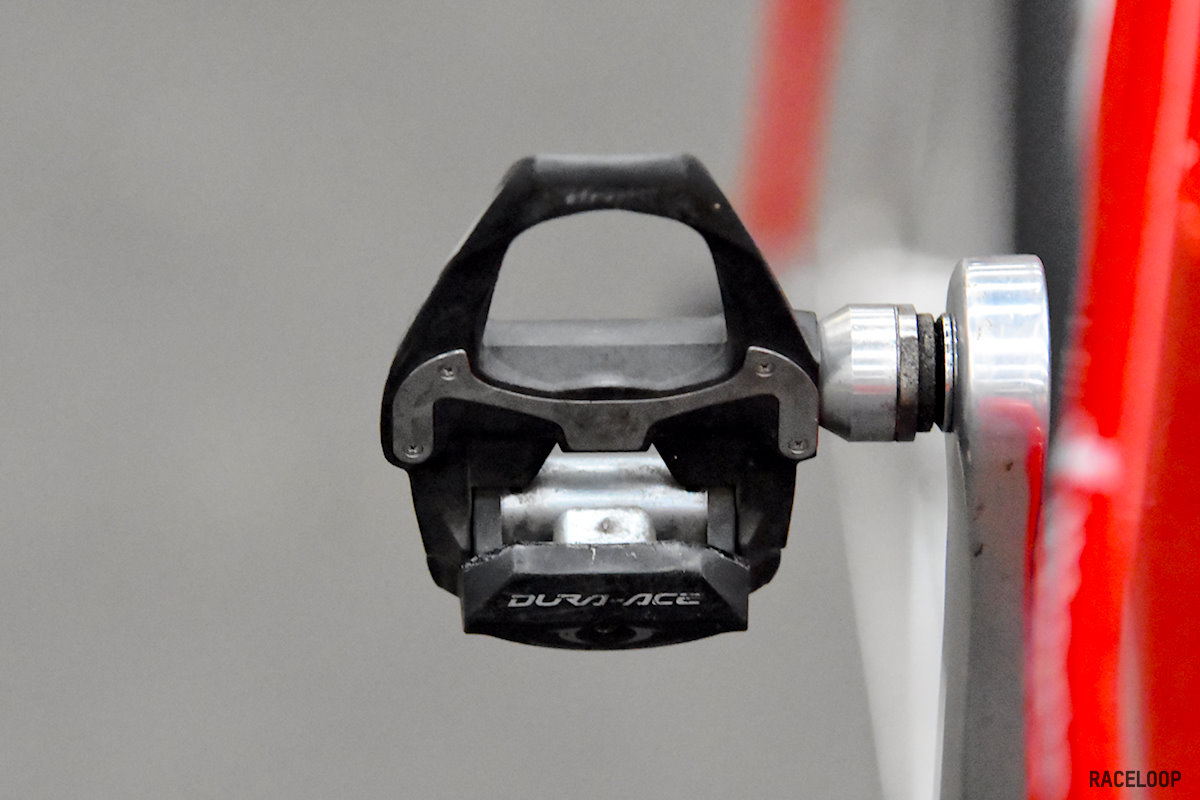 Dura-Ace pedals have been chosen for the stable platform they provide. Unlike the LOOK pedals which have a similar platform, the pedal/cleat interface on Shimano pedals tends not to be prone to developing side to side “rocking” between the cleat and pedal. O’Brien runs with the red Shimano cleats which offer 0 degrees of float.

“I run the red cleats on the track because like everything I have in the track I like it to be rigid and tight. I have laces on my shoes to get them extra tight, I even bought my track shoes half a size too small to get a very snug fit. That way It feels like all the power is going through the bike.” 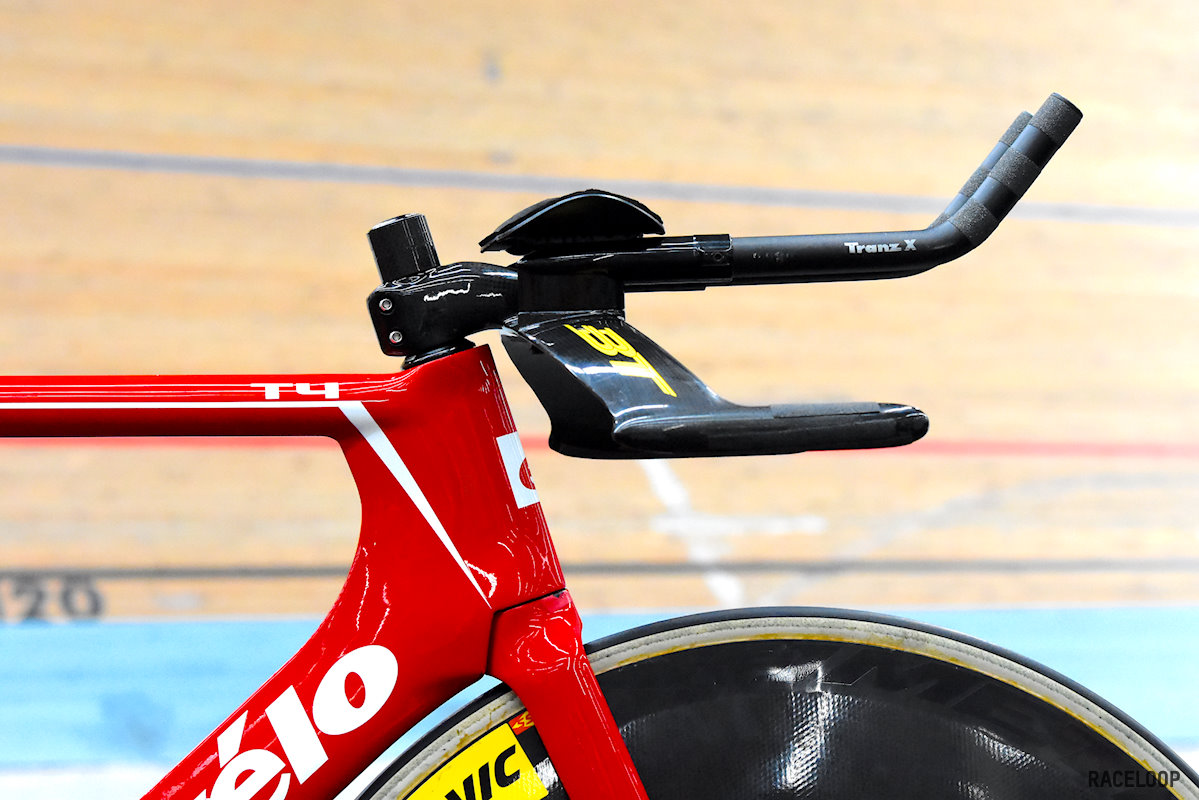 The BT aero bars look almost out of place on this frame but they are rock solid and their deep drop allows O’Brien to get maximum leverage when launching out the start gate. It’s not uncommon for riders to not fully trim their steerer tube on bikes they use for both pursuits and bunch races (as O’Brien does). Aerodynamically it’s less than optimal but it’s practical when changing between positions.

O’Brien pays considerable attention to ensuring his aero bars are within 85cm in front of the bottom bracket. At 190cm O’Brien is a tall rider and the UCI rules are nearly always very difficult to deal with for such a tall riders. 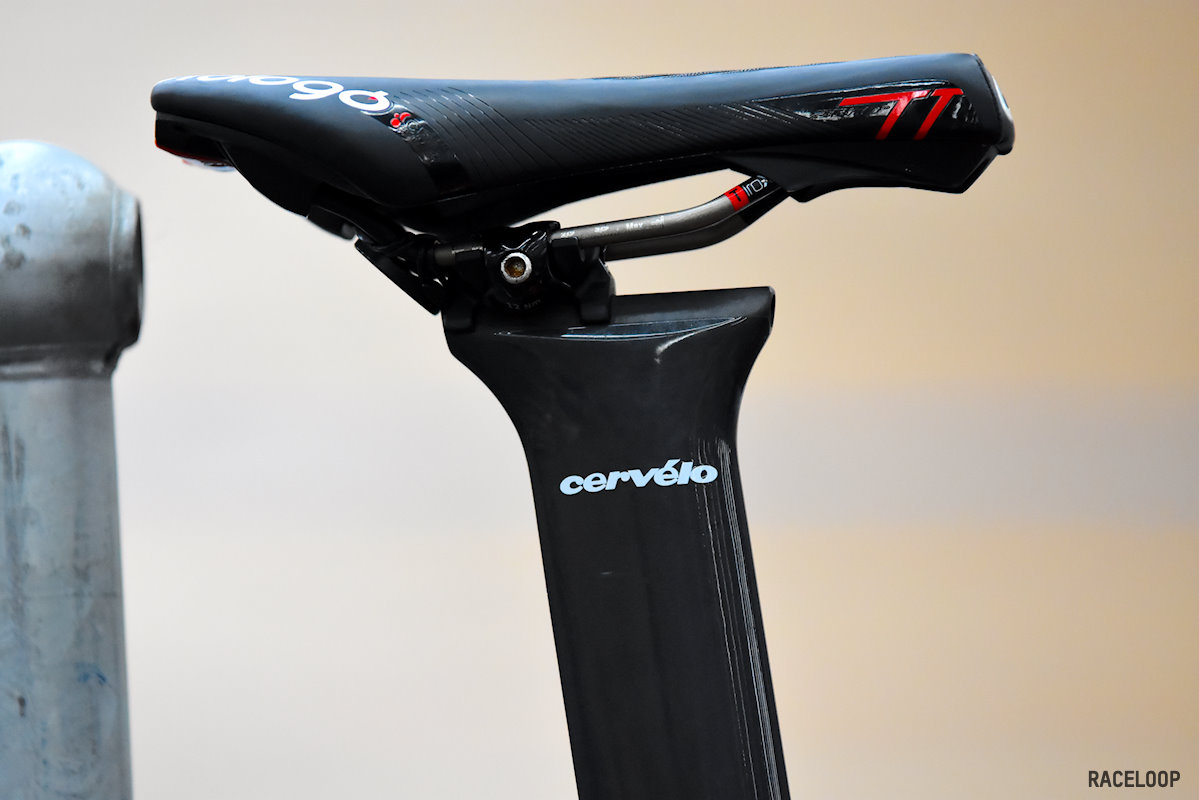 O’Brien sets the seat at 5cm behind the bottom bracket which is the minimum distance permitted by the UCI . The saddle position is constant between his bunch and pursuit positions. O’Brien explained that the seat was set during a bike fit and since then it hasn’t been changed. This explains the position of the rails and seat post clamp. 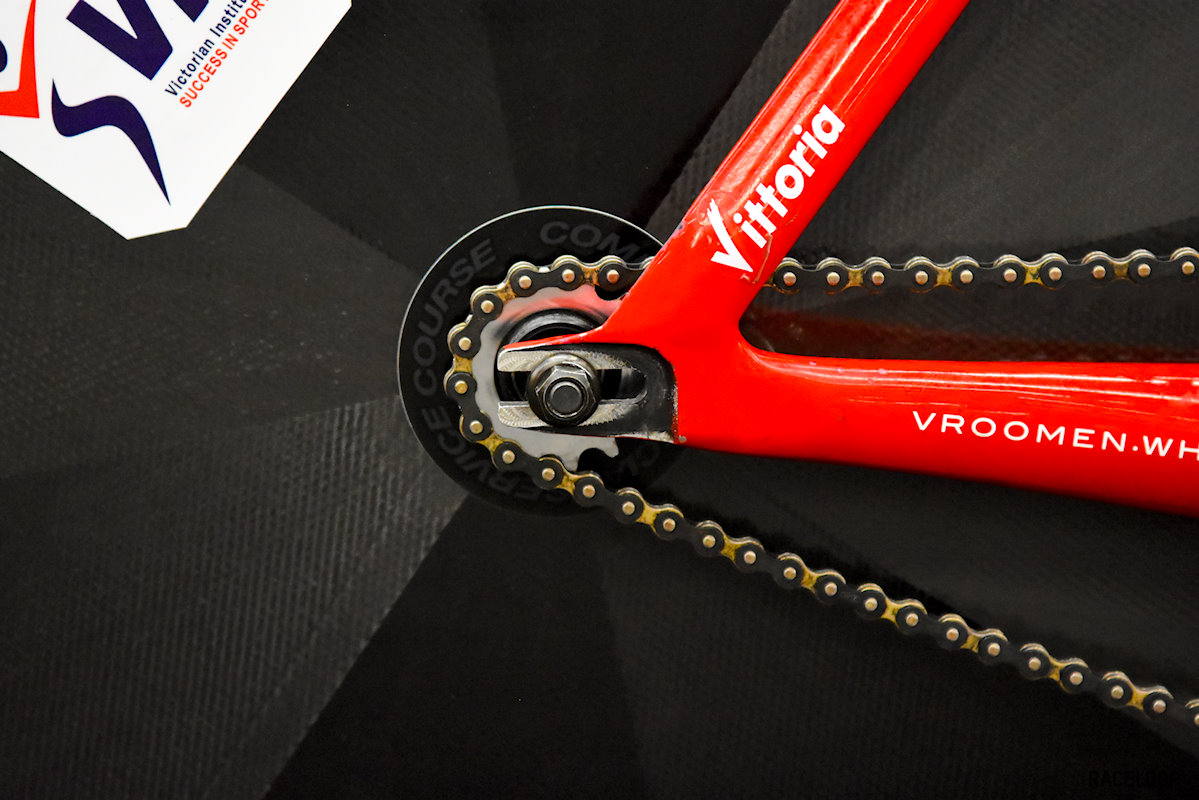 Interestingly, Cervelo has chosen to run aluminium dropouts with no steel shims to protect the dropout faces. Although they supply a chain tensioner so there is less need to over tighten the rear wheel nuts, I have yet to see a single rider use it. Drop outs that receive high use will require filing before too long. For most riders this won’t be a problem but for riders such as O’Brien who spend a large amount of time on the track throughout the year this dropout design choice can be problematic. 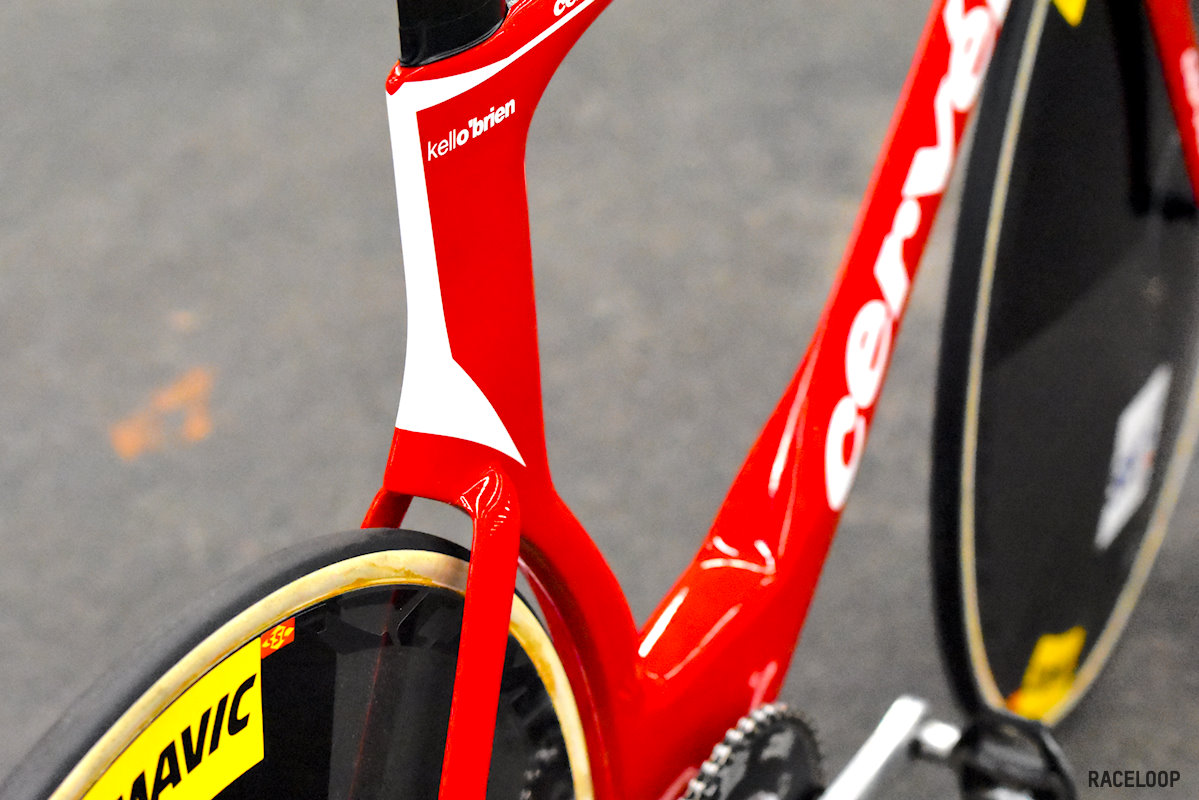 The lenticular shape of the rear Mavic Commete does not fit properly into the frame so the rear wheel needs to be positioned far back in the rear drop outs. For flat disc wheels or spoked wheels this frame does not present a problem but the shape rear chain stays will not properly accomodate the width of the Mavic (and Pro) disc wheels unless the wheel is pulled back in the frame. O’Brien rides the largest sized T4 where this design requires him to pull the rear wheel back as far as possible to achieve adequate clearance under load. This leads to less adjustability so O’Brien needs to use two different chains to suit various gear combinations. The smaller frame sizes do not have the same problem. 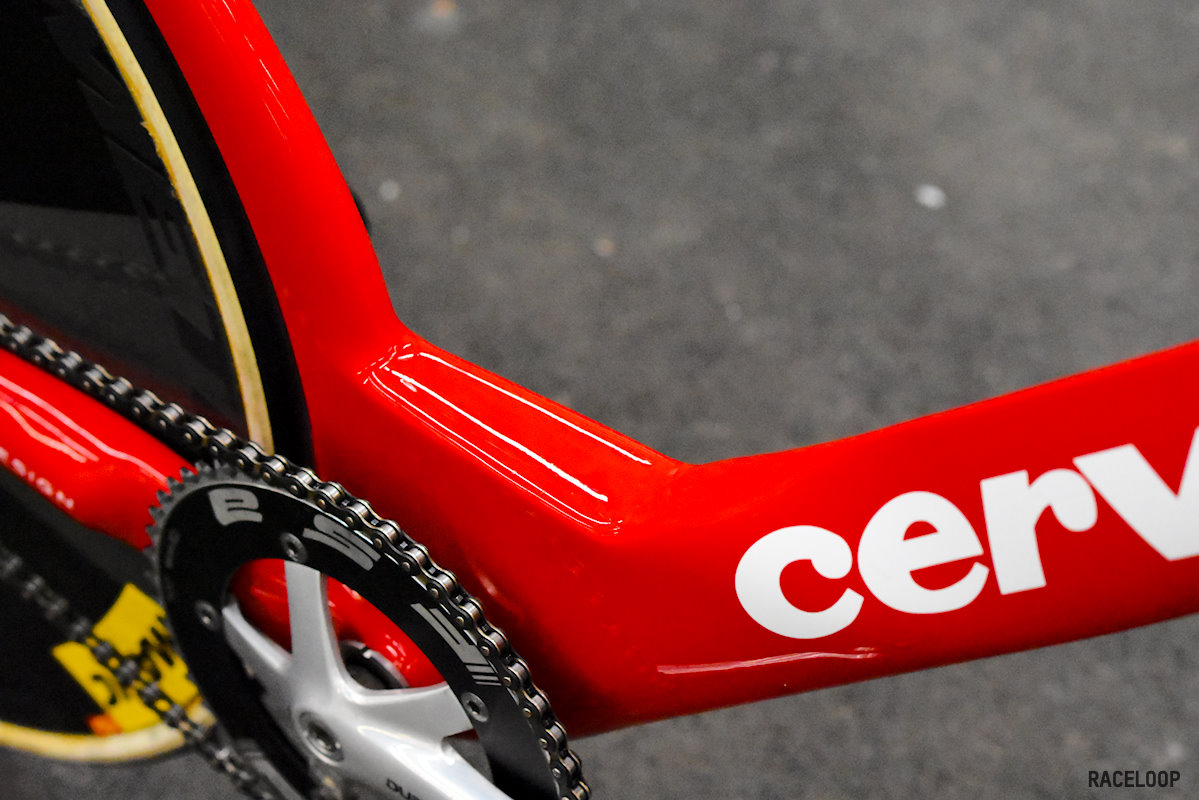 The Cervelo’s bottom bracket shape has up until now been unique. Argon 18’s new track frame design for the Danish Olympic Team appears to be modeled on this shape. (note: the Danes rode Cervelo T4s to a Team Pursuit bronze at the 2016 World Championships in London. 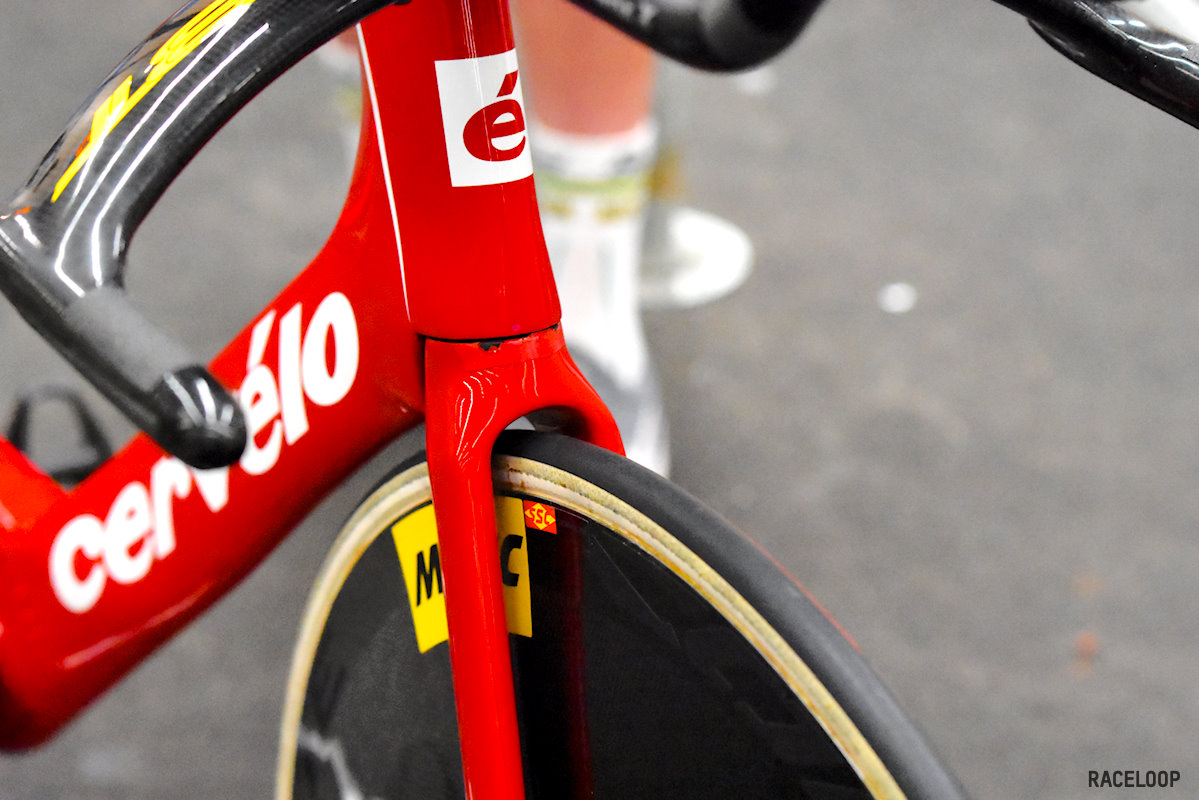 The T4 was designed with aerodynamics in mind which explains why it is not uncommon to see small chips on the front of the forks from hitting the frame when they inevitably spin backwards when handled & stored. Although not ideally practical (in the event of a crash), this frame seems to have been built for speed first which may help explain why so many of the world’s elite endurance riders ride these frames. 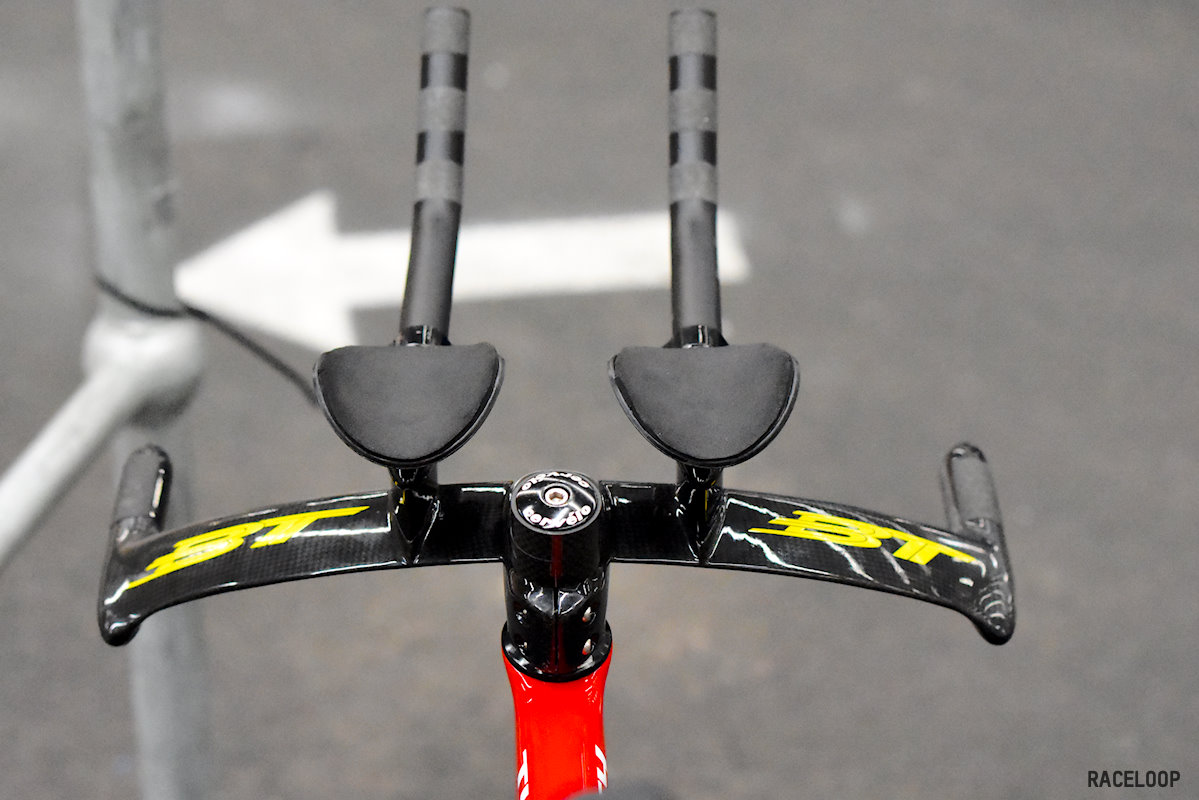 O’Brien runs a narrow stance set on his aerobars as he is flexible and strong enough to hold a highly aerodynamic position that many riders would find difficult to achieve. It is quite common amongst pursuiters to use skateboard grip tape in lieu of bar tape. 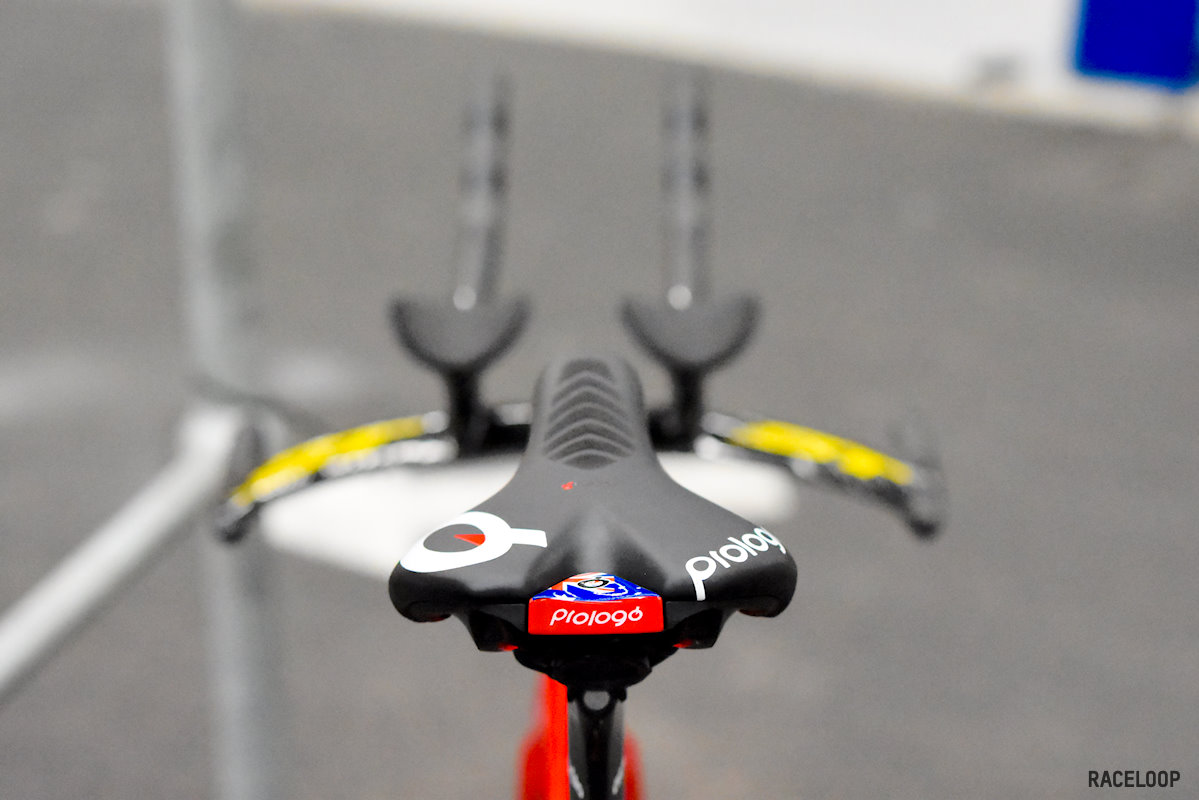 Yep, that’s an Australian flag on the back of O’Brien’s bike. It’s good to be a Aussie! 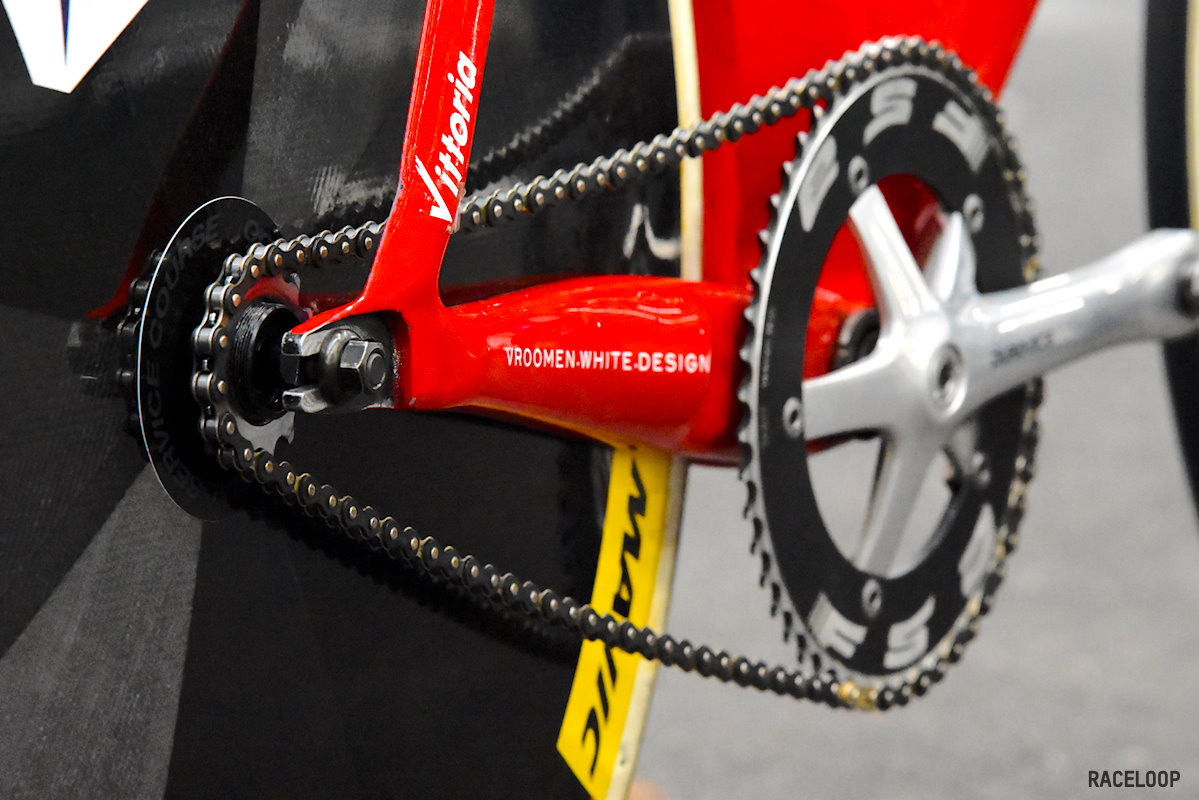 The Mavic double disc setup is the standard choice amongst many of the world’s best. 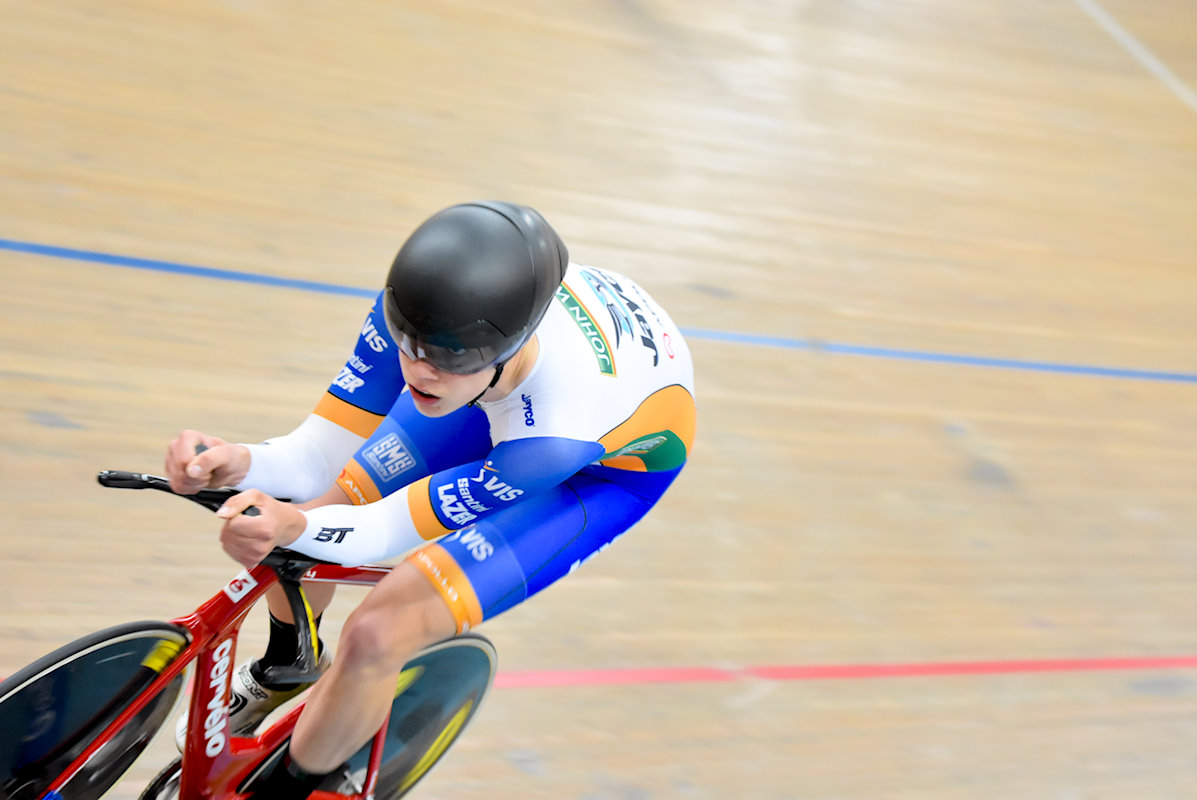 Overall, this is one of the top off the shelf racing machines on the market and this is reflected by the high number of elite endurance riders riding these bikes at the 2016 Australian National Championships and the 2016 UCI World Championships in London. This demonstrates that this frame has commanded a lot of respect from the high performance (endurance) track cycling community.

The geometry of the T4 has been well thought out in that it sees a lower bottom bracket, slacker head angle, longer reach and shorter head tube. This suggests that this frame has been built from the ground up as a race machine by people who have done their homework with regards to bike fit and stable handling. It will be interesting to see how Cervelo thinks they can improve on this frame for the Rio Olympic games. 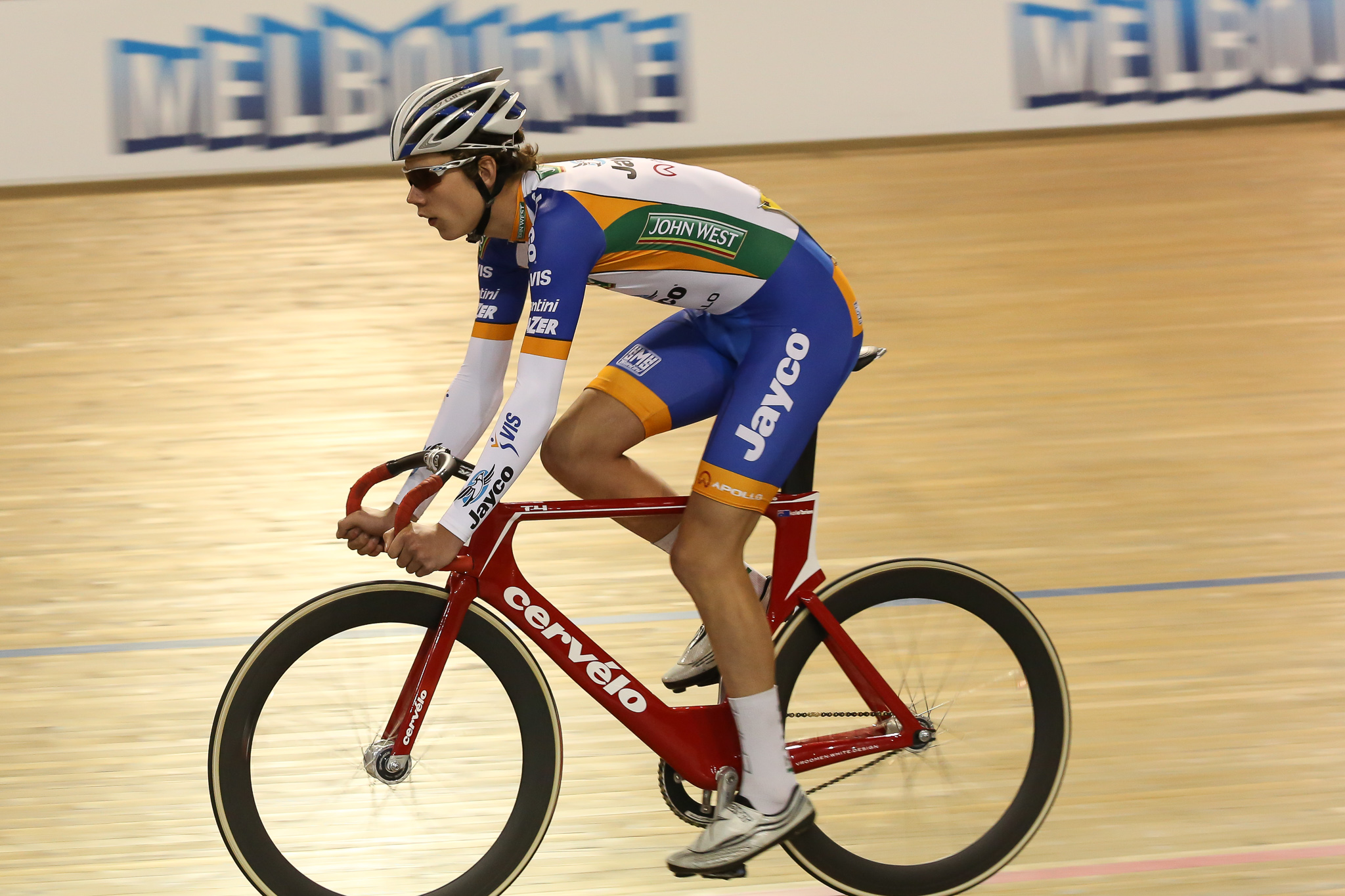 Like Loading...
Category: Bikes
Tags: bike setup, bikes, Cervelo T4, Kell O'Brien, technical, track
We use cookies on our website to give you the most relevant experience by remembering your preferences and repeat visits. By clicking “Accept All”, you consent to the use of ALL the cookies. However, you may visit "Cookie Settings" to provide a controlled consent.
Cookie SettingsAccept All
Manage consent